The American Teacher Act: Pay Raises and Other Shiny Things

Just before Christmas, Congresswoman Frederica Wilson and Congressman Jamal Bowman proposed the American Teacher Act that most notably establishes on the federal level a minimum teacher salary. I don't know Congresswoman Wilson, but I've been in a room with Congressman Bowman and he is a heck of a human being. Randi Weingarten (AFT) likes this idea. Becky Pringle (NEA) likes this idea. Even folks like Teach for America, TNTP, and the Education Trust like this idea, though plenty of other reformster crews do not. 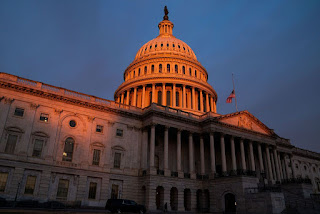 The bill reportedly authorizes the funding of four year grants. Four years is not a long time. What is supposed to happen in year five? Nobody can kick a can down the road like the federal government (remember NCLB and "all students will score above average a decade from now, somehow--look, we'll figure it out later"). But what happens then? Does the salary floor stay in place and suddenly poor districts are locked into teacher costs they can't afford? Because that will mean cuts out the wazoo.

And that, of course, assumes that the thing is fully funded in the first place. IDEA is a great concept--but the federal government has never actually funded it the way they promised they would. Discussions of this act include troubling phrases like noting that local "agencies" with a mostly low or medium income students would be "prioritized." Well, wait-- you only need to prioritize the money if you don't expect to have enough to cover everyone.

My local contract is up. Do I now have to negotiate with DC for my next pay scale? The state? Which brings us to...

There's this line from Wilson's PR release about the bill:

Grantees would be required to establish a statewide teacher salary schedule or otherwise with a minimum threshold of $60,000 and annual increases congruent with the inflation rate.

There are states that have state-wide teacher salary schedules; I'm not convinced there are any benefits at all. In a state as demographically varied as Pennsylvania (aka "all of them"), it's nuts. Teaching in my rural area and teaching in a wealthy Pittsburgh suburb and teaching in central Philly are different animals, especially in terms of cost of living. Could Pennsylvania, where state funding is already inadequate, come up with--and fund--a functional state teacher salary scale? I would not bet my lunch money on it.

Wilson explains that salary schedules and structures have to remain in place; when the first step is boosted up to $60K, all the other steps must rise accordingly. This, again, makes this act hugely expensive. Is the federal money going to fund all of those step increases, or just Step One?

Who is going to monitor local districts to determine that they have complied? And if they haven't, what happens next?

The bill has a "maintenance of effort" that is supposed to ensure that states won't use the federal money to replace state money ("since the feds are funding this increase of salary to $60K, we're going to cut our original $50K step to $40K") which is one of those aspirational regulations.

We've been down this road in Pennsylvania. Governor Smilin' Ed Rendell took our slice of 2008 Recession Relief stimulus money and totally used it to supplant ed spending--when that money ran out, Governor Tom "One Term" Corbett was left holding the responsibility for a $1 billion "cut."

"Maintenance of effort" requirements are great, but in practice, they're nearly impossible to prove and largely unenforceable. There are a million reasons the district or state might "need" to make some cuts that happen to coincide with the arrival of federal grant money. And then the grant money runs out and you're in a financial mess.

Also, is this going to apply to charters as well as public schools?

Wilson also throws in "Invest in a national campaign to expand awareness of the value of teaching and encourage secondary and college students to consider teaching as a career." The feds have tried this sort of thing before. I suppose it's better than, for instance, having a secretary of education who sneers at teachers and calls public education a dead end, or one who insists that poverty is caused by teachers who don't expect enough from their students, but a federal PR campaign is unlikely to move the needle much.

I am sure this is well meant. I am sure that it's aimed at a real issue. And I'm sure that it will be opposed by some folks with whom I disagree about practically everything else. But I also think that trying to fix the condition of state and local teacher pay from DC is like trying to trim your bonsai garden with a chain saw tied to the other end of a ten foot pole.

I'd be happy to be convinced I'm wrong (you know where to find me), and people I trust are pointing out that it is a step in the right direction, which, yes, it is, but this just seems like a really bad idea.

Posted by Peter Greene at Wednesday, December 28, 2022
Email ThisBlogThis!Share to TwitterShare to FacebookShare to Pinterest