The Gates Team Wants To Swing For The Education Fences. Maybe There’s A Better Way For Them To Play.

It says something about Bill Gates that after using the expression “swing for the fences” in the title of his foundation’s annual letter, he also feels the need to explain it:
That’s a phrase many Americans will recognize from baseball. When you swing for the fences, you’re putting every ounce of strength into hitting the ball as far as possible. You know that your bat might miss the ball entirely—but that if you succeed in making contact, the rewards can be huge.
It also explains why, after twenty years, Bill and Melinda Gates have yet to get near the fences on education. 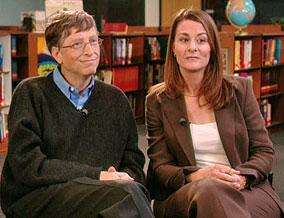 The Gates legacy in education includes several expensive whiffs. There was the small schools initiative, on which he spent $2 billion, and then there was the initiative for improving teachers, which was less expensive, but no more successful. And then there’s the Common Core standards, behind which Gates threw an immeasurable amount of money and influence. All created far more disruption and expense than anything resembling success.

All of these were, in fact, swing for the fences initiatives—attempts to hit a home run that ultimately stirred the air over home plate.

Educators have watched the Gates’ take multiple times at bat and wondered if they have learned anything yet, but the annual letter from the foundation namesakes rarely offers any hope. And perhaps the swing for the fences mentality is a good model of the problem. Take this observation from Melinda Gates about achieving success with their education initiatives:

The fact that progress has been harder to achieve than we hoped is no reason to give up, though. Just the opposite.

In other words, I keep going to the plate, swinging with all my might, and missing. My solution is not talk to a hitting coach or take a step back and look at what I’m doing; the solution is to just keep doing it, only harder.

Melinda Gates bemoans the fact that there is disagreement on what works and what doesn’t in education, and that’s partly correct. There are plenty of things we know don’t work, but there is also a very wide range of things that may or may not work for any given teacher with any given student on any given day. Education is messy work, and if your intent is to neaten it up and standardize it so that everybody is doing everything the same way, you are doomed to disappointment. You have to watch the pitcher, know the situation in the game, and keep your eye on the ball so that you can make a split-second decision based on all the elements of that actual moment. There is no standardized swing that will get you a home run with every pitch.

But when Bill Gates takes over the letter’s narrative, we are back in familiar territory. He revisits the Common Core and as has become his wont, he admits it was a failure, sort of.

We bet big on a set of standards called the Common Core. Nearly every state adopted them within two years of their release. But it quickly became clear that adoption alone wasn’t enough—something we should’ve anticipated.

It’s not that the standards were flawed, or that the very idea of imposing a national set of top-down standards was flawed. They just didn’t swing hard enough. So they created a market guide so that schools could pick the correct instructional materials. And they looked for ways to better “support” teachers (”support,” teachers learn in many professional development sessions, is a euphemism for “correct” or “re-educate”). And now they are shifting to a new version of scaling up.

The old version of scaling up is to take a solution from one spot and take it to market everywhere. Now the Gates wants to push locally adapted solutions “tailored to the specific needs of teachers and students in the places we’re trying to reach,” to network schools so that they can share, so that they can have “opportunities to learn from each other.” This would sound more hopeful if it were not teamed up with statements like

...many teachers didn’t have access to the resources they needed to meet the new expectations. So, we looked for ways to provide more training and help them adjust their practice.

This suggests that the focus is still on trying to fix teachers rather than help them, on trying to impose expectations from above, just using a more customized imposition to help develop more localized compliance.

In other words, the Gates Foundation still dreams of fundamentally transforming the entire US education system—swinging for the fences. And that desire to completely transform the system (a system in which they have no real expertise) remains the most fundamental flaw in their approach.

Every kid who picks up a bat dreams of that moment—a mighty swing, the hefty crack that kicks back up your arms, the triumphant trip around the diamond. Watch the littlest players step up to the plate, maybe even close their eyes and swing with all their might. And miss. And miss, and miss, and miss, and miss. “Look,” says a coach. “Just ease up. Keep your eye on the ball, get the bat out there, and just meet it.”

The power of your swing means nothing if you don’t meet the ball where it is. Here’s my suggestion for Bill and Melinda Gates. Take a year off from education (a gap year, if you will). Spend it traveling the country, talking to teachers—and not just ones that have been carefully vetted. If you aren’t hearing from critics, then the gap year is failing. Don’t pitch your ideas; instead, just keep asking one question: “What can we do to help you?” That’s it. Just keep asking and listening for a year. Then instead of swinging blindly for the fences, you can meet the ball where it is. Maybe you’re destined to only hit a double or a single, but those win games, too—certainly more than big expensive strike-outs
Originally posted at Forbes.com


Posted by Peter Greene at Monday, March 09, 2020
Email ThisBlogThis!Share to TwitterShare to FacebookShare to Pinterest