OK: Lowering the Bar Even Further For Teaching

Oklahoma has had trouble holding onto teachers for quite some time. A 2018 report found that over the previous six years, 30,000 Oklahoma teachers had left the classroom. Keep in mind that the state only employs about 52,000 teachers. Oklahoma has real trouble recruiting and retaining.
What could it be? What could it be? The lowest per pupil spending in the region? The low pay? The constant disrespect directed at them from public figures? The fact that their right-tilted leaders have spent years and years in a schoolhouse version of this conversation:
RTL: (Set fire to buildings)
Occupants: Hey! This building is on fire! We could use some help here!
RTL: We are shocked and outraged at your failure to keep your building safe!
Occupants: A little help here?
RTL: Nonsense. We are going to set up charter and voucher buildings where folks can escape from the fire that some irresponsible parties are unwilling to fight.
And then, every so often the Oklahoma GOP sees some corner of the building not yet engulfed in flames and takes a can of gasoline and a blowtorch to that. 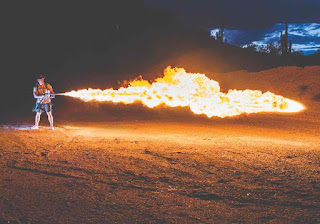 That includes, especially, the teaching profession itself. That includes a whole set of rules that allow all manner of alternative paths to the classroom, including the popular "as long as you have a college degree in something, we might as let you teach" rule.
But it turns out that wasn't loose enough. Oklahoma had a category called "adjunct teacher," a designation awarded to someone who had nothing but a high school diploma. But an adjunct teacher had limitations, allowing only 270 clock hours of classroom teaching per semester.
Last January, Senator Jessica Garvin  (former nursing home administrator) decided to fix that by proposing that the limitation be axed, and school districts allowed to stick adjuncts in a classroom for as long as they liked.
"Increasing pay and other recent changes haven’t helped end the teacher shortage problem, so we need to look at what assets we already have available, like adjunct and substitute teachers, and how we can better utilize them,” Garvin said.
Yes, say Oklahoma's leaders, we tried one thing, one time about four years ago, so clearly there's nothing left to do but lower our definition of what a "teacher" is. The bill, of course, passed.
Adjuncts are supposed to have "distinguished qualifications," but local districts get to decide what they think that means.
This is the kind of dumb law that makes me wonder whether these folks are cynical or just, you know, dumb. Now that the law has been in place for this year's start, the Norman Transcript gathered some reactions, and oh boy.
Contemplating the 370-or-so adjuncts hired this year, Bryan Duke, interim dean at the University of Central Oklahoma's college of education had some thoughts:
He said lawmakers promised the changes would draw highly-trained professionals, but based on conversations with district leaders, he said “that is not what we’re seeing.”

“We’ll just say that I’m not aware of those qualifications,” Duke said. “And, I certainly doubt that most folks would have those qualifications.”
Seriously, lawmakers? Exactly which highly-trained professionals did you imagine were going to jump at the chance to make less than $50K for doing teaching, which is--and I can't say this often enough--a really, really hard job to do when you're an amateur.
That may have included Rep. Kyle Hilbert ("A new generation of conservative leadership"):
“I would push back on anyone that says that just because someone doesn’t have some letters next to their name that they’re less intelligent than someone else,” Hilbert said. “Some of the smartest people I know, their highest level of education is high school. and if they’ve got a career of experience and excellence in their field, perhaps they do have some expertise that they can bring.”
This is dumb stuff to say. Dumb. It shows a complete lack of understanding of what teaching actually involves. But its State Superintendent Joy Hofmeister who really offered some useful observations to the Transcript:
State Superintendent Joy Hofmeister, though, appeared stunned when she learned during an interview that lawmakers had stripped the college degree requirement for permanent teachers. She whispered “Oh my God!” under her breath.

She called the change “worrisome,” and said Oklahoma parents expect and deserve a college-educated teacher for their child.

Educating is a science, and students benefit from college-trained graduates who have the practice and expertise in helping students lift outcomes, particularly in reading, she said.
Hofmeister said when someone enters school having previously owned a Hallmark store, they don’t have the experience and training to step into a second-grade class.

“There are some who really seem to think that what is happening in school is a lot of babysitting,” Hofmeister said, “and it’s not. Kids don’t get back these days. They need to be spent with those who have the expertise to deliver an excellent education, and we have to do more.”
Hofmeister just launched state Science of Reading academies in order to train teachers in the One True Way to teach students to read. That's $13 million wasted. If you thought it was a terrible, awful, no good, really bad thing that schools of education weren't teaching teachers the One True Way to teach reading, then how must you feel knowing that classes can now be run by people who have never learned anything about teaching reading at all?
Of course, it may be that the legislators are not so much dumb as they are focused on what has long been a set of Oklahoma education goals--to privatize it, to crush that troublesome teacher union, and to spend as little on it as possible. This is McDonaldization in action--the larger your pool of potential employees, the less you have to pay them and the more easily you can replace them. And the more you degrade teaching in public schools, the more you can push charters and other private schools. It's the Florida model--to make your charters and vouchers look better, make public schools look worse.
Alternate pathways to the class are not automatically a bad thing, and being able to tap professional expertise can be a big benefit for schools. But this measure goes far beyond that.
And if Oklahoma legislators think that there's a vast untapped supply of people who would have made really great teachers, but skipped it because of some red tape--well, they might want to look at a 2017 survey of Oklahomans who hold teaching certificates but weren't using them. One third said more pay might tempt them, but two thirds said it would take more, like respect, autonomy, professional treatment. Do legislators imagine that people who didn't train to be teachers will be happier about mediocre pay and general disrespect?
Oklahoma (and other parts of the country) didn't dig this hole overnight, and they won't fill it overnight, either. But solutions like "just let anyone fill the job" is just digging the hole deeper and deeper. It sends a terrible message to people who bothered to actually invest time and money in preparing to teach, and an equally terrible message to people considering entry into the profession. This is a lousy solution to a real problem.
Posted by Peter Greene at Monday, December 05, 2022
Email ThisBlogThis!Share to TwitterShare to FacebookShare to Pinterest