Before I get started here, let me be clear about one thing--it is almost impossible to imagine a candidate worse for public education than Donald Trump. His "polan" for education has only two items-- school choice (via vouchers) for everyone, and make every school teach American exceptionalism, which, given his recent assaults on the 1619 project and diversity training, appears to mean getting back to the white-centric education that gramps enjoyed as a boy. Plus you've got Betsy DeVos, who is twelve kinds of awful when it comes to public education, which she seems to pretty much hate and wants to get rid of.

So just to be clear-- there's no universe in which Donald Trump is a better choice for public education. 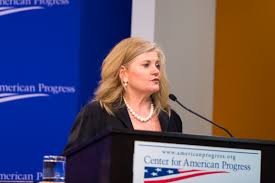 Now, let's look at what we've been hearing from the Biden campaign.

First of all, you may remember that something called the Unity Committee drafted up some platformy ideas by smushing the Biden and Sanders campaigns together. That resulted in an education platform that repudiated the private profit motive in education and called for tighter charter controls. They also promised to "end the use of high stakes tests"--well, they promised to "work" to do that, and then blah blah blah multiple and holistic measures. It was weak sauce, but it was something.

That language has disappeared entirely from the Biden platform on K-12 education. The words "charter" and "profit" don't even appear on the page.

Then there's this piece from yesterday's the74, profiling "Biden's most important staffer you've never heard of" who is "likely headed for a high level job in the White House" is Biden wins. That's not good news.

This is Carmel Martin, a lawyer by training, who has bounced back and forth between public and private sector work. She was a Senate staffer who helped create No Child Left Behind. She spent time at the Center for American Progress (often called the holding tank for Clinton staffers-in-waiting between administrations), where she spent some time stumping for the Common Core. She worked under Arne Duncan in the Obama ed department. She was a n education advisor to the Hillary Clinton campaign. She has been a vocal supporter of school choice. She headed up #TeachStrong; the74 says it was launched to "modernize the teaching profession" but I think "provide some flank coverage and education policy ideas for Clinton's White House" would be more accurate. TeachStrong's website is still up, but its last scheduled event was in November of 2016.

TeachStrong involved a massive batch of collaborators, which is supposed to be Martin's strong suit. And Neera Tanden, CAP boss, tells the74 that Martin is evidence-based and won't pursue a policy just because it was her policy twenty years ago. She's also supposed to be loaded with lots of deep relationships.

It's not encouraging. The concern about Biden has always been that he will be one more neo-liberal corporate Democrat who favors charters, testocracy, and privatization of public schools. That's Martin's whole history. Her presence on his team is not a good sign.

Am I suggesting that's reason to not vote for Biden. Nope. But I am suggesting its reason to get ready to spend lots of time watching out for public education and speaking out from Day One. It's time to stop Betsy DeVos and Donald Trump from driving public education on a cliff, but that doesn't mean we should go back to the Clinton-Bush II-Obama path, either. It's no surprise that we're here, but it's still disappointing to realize that there will be no rest for public school advocates.
Posted by Peter Greene at Thursday, September 10, 2020
Email ThisBlogThis!Share to TwitterShare to FacebookShare to Pinterest