This, believe it or not, is about the deal involving social media sensation, Tik Tok.
At first, the whole Tik Tok business looked like a basic old-fashioned shakedown. "That's a nice little tech biz you have there," said Trump. "Be a shame if anything happened to it." Okay, not really that subtle-- it was more along the lines of "I'm going to ban your business unless you give my buddies a cut." 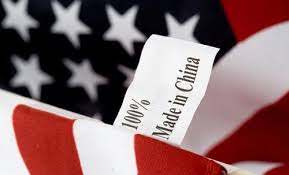 Tik Tok is not an angelic app without issues; security experts have been saying for a while now that the app is just Chinese spyware with a video feature, collecting data for China. Trump said he would shut down the app unless a piece was sold to a US company. So Oracle, run by Trump buddy Larry Ellison, and Walmart, under CEO and Trump supporter Doug McMillon, have set up a deal to get a piece of Tik Tok action. ByteDance, the company behind the app, would transfer control to a new entity in which ByteDance still held 80%, and Walmart and Oracle had their piece of the action.

Trump gave his blessing, but threw in a surprise announcement--the new company is going to hand over $5 billion to help fund his super-duper patriotic American history project. This was news to some of the partners, but you know what they say--shaken down for a penny, shaken down for a pound.

Trump's grand history project, in which US students will, well, something:

We will stop the radical indoctrination of our students and restore patriotic education to our schools,” he said at the rally. “Patriotic education,” he repeated, describing it as teaching children “to love our country, honor our history and always respect our great American flag.”


The program has zero specifics, and the one concrete example of what the administration has in mind is pretty awful. So it may be that this is nothing more than empty campaign noise for the base; look for Trumpian history to premiere during Infrastructure Week.

But if it really happens, and this deal completes, and the partners fork over the $5 billion, that means that Trump's shiny new patriotic curriculum will be financed in part by China. Given that the Chinese have considerable experience in educating and re-educating citizens to properly appreciate the golden beauty of their history and the gift of their Beloved Leader, there seems like a sort of twisted poetry to that. And Trump's patriotic history could be just one more Trumpian campaign item that was made in China.
Posted by Peter Greene at Sunday, September 20, 2020
Email ThisBlogThis!Share to TwitterShare to FacebookShare to Pinterest