The Unity Task Force has been working hard to convince Sanders supporters to back Biden to come up with policy statements that will appeal to all wings of the party, thereby promoting Unity! Huzzah! 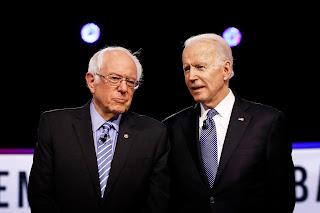 I almost didn't bother to look; this is a document that will be fed into the shredder that is the Official Platform Process, and it's pretty hard to compare about party platforms in a Presidential race. When was the last time that any President announced, "I am now going to push for this policy because even though I'm not all that invested in it, we did have it in my official party platform, so I'm totally going to pursue it." I'm pretty sure that is never.

But it's still worth tracking the thinking of the Democratic Party, a party which has not been a friend to public education in a very long time, and their identification of what the main issues are. And the Unity Gang has released their recommendations, and right here on page 22 we get to their education ideas. And since this comes mostly from the Sanders camp (which had a very good eduplan) and the Biden plan (which didn't have much of a discernible plan at all), it'll be interesting to see where they landed.

"Providing a world-class education in every zip code" is the header. From there we leap into a lead paragraph that rattles off the many "multiple, overlapping crises" with which the country is "beset." We should try to fix those. That sentiment leads us to this familiar thought:

Education is the key to addressing the challenges before us—to growing our economy, maintaining American competitiveness on the world stage, and building a more just, equitable, civically engaged, and socially conscientious nation.

So I guess we're sticking with that old fave, "It's the schools' job to fix everything wrong in the country." Thanks a lot, Unity Gang.

That thought is followed by a better one--education is a "critical public good--not a commodity" and the government should ensure that every child everywhere should get a "world-class education that enables them to lead meaningful lives" no matter what their circumstances.

There's a nod to the pandemic reminding us that schools are super-important and hard to replace. But there are also some golden oldies packed in here:

Despite ample research showing that early childhood education can improve outcomes for students for decades to come...

Harkening back to the old Chetty/Hanushek claims that a good first grade teacher will lead to richer students later in life (which is baloney).

Democrats fundamentally believe our education system should prepare all our students—indeed, all of us—for college, careers, and to be informed, engaged citizens of our communities, our country, and our planet.

I suppose it's a blessing that they didn't just stop after "careers," and the engaged citizen addendum is a step in the right direction.

And there's plenty of this sort of thing:

We are committed to making the investments our students and teachers need to build equity and safeguard humanity in our educational system and guarantee every child can receive a great education. We will support evidence-based programs and pedagogical approaches, including assessments that consider the well-being of the whole student and recognize the range of ways students can demonstrate learning.

Good old-fashioned task force writing, the kind of sewing together of various elements and concerns that leaves the stitches visible and still oozing all over the sentence. Well, so much for the intro. Moving on:

Whatever is the opposite of the fabled Third Rail, that's what early childhood education is--safe and warm and fuzzy and everybody embraces it without fear. So, yay-- Pre-K for everyone! Some of the language here is hinky, like "we will drive increased resources to the communities with the highest needs," which could easily mean some program to get investors to put money there and privatizing the sector.

They do note that affordable childcare is a problem in this country, and they want to fix that. And they want to raise "early childhood standards" which is always the problem, isn't it--trying to quantify and measure ECE quality. But they are right on making sure providers are paid decently.

The US spends more on white districts than non-white ones, so let's triple Title I spending, and see if we can get states to come up with better funding formulas. Also universal free lunch.

There should be multiple pathways available, like career-tech ed and magnet schools and International Baccalaureate and early college. And there's a committee-created list of stuff that education should develop, like 21st century stuff and deep learning and judgment and none of it's objectionable, but it doesn't mean much of anything, either.

Charter schools. The Unity Gang borrows some language from the Sanders campaign and reiterates that public schools are a public good and "should not be saddled with a private profit motive, which is why we will ban for-profit private charter businesses from receiving federal funding." This is an important step forward from the old "no for-profit charters" language we're used to hearing because that's not where the big privatized money is in charters, anyway. The Unity Gang also calls for "more stringent guardrails" for charters, including making them observe all the accountability rules that public schools must follow, which is long overdue in some states. They will also call for making federal funding for new or expanding charters contingent on the district review of how well the charter serves neediest students, which doesn't even begin to go far enough, given the broad range of ways in which federal funding for charters has been wasted and thrown at fraudsters.

They want schools to be places of "physical and psychological safety" and call for more resources, but no guns, and basically to put back all of the Obama-era guidance that Trump has removed. That includes reviving the ed department's Office of Civil Rights and keeping ICE off campus. They are unhappy that segregation is worse today than in the time of Brown v. Board, but they don't actually offer a solutions beyond busing and magnet schools. So, not a strong point there.

The Unity Gang would like to become the most recent group to promise to fully fund IDEA and, hey, it could happen.

They take a strong and specific stance against the Big Standardized Test. However, they then wander off into the Weeds of Vaguitude:

Democrats will work to end the use of such high-stakes tests and encourage states to develop evidence-based approaches to student assessment that rely on multiple and holistic measures that better represent student achievement.

That, of course, could mean pretty much anything. "Evidence based" in government speak means, literally, nothing at all. So this is not really encouraging at all.

This section closes with an Ode To Heroes, stating that teachers should have the right to unionize, be paid better, get good benefits. There's some language in here about support staff climbing a professional ladder, and recruiting a "diverse educational workforces," which is a major need right now, so they get points for at least mentioning it.

Basically, they plan to reverse the giant DeVosified mess that student loans have become, including fixing up the loan forgiveness program. In fact, there's a whole paragraph about demanding that she get her act together right now. Also, pandemic debt relief.

Biden's folks really want you to remember how badly the Trumpers have dropped this ball. Promises include more funding. Assertions include coming down on the side of in-person school, and schools should get assistance in figuring out when alternatives are necessary, and by the way, let's pump some resources into the on-line infrastructure that is incapable of supporting distance learning in so many places.

So there's the document. Not sure what influence it's going to have either on the voters or the politicians for whom it pretends to speak. It counterbalances the emerging Trump campaign thrust ("They're coming to get you, and only I can protect you") and some of it sounds nice, but of course we've been led down the educational garden path before. Supporters of public education will have to pay close attention after November, and that's not new.

Posted by Peter Greene at Monday, July 13, 2020
Email ThisBlogThis!Share to TwitterShare to FacebookShare to Pinterest