DeVos Has No Plan

It's a brief three and a half minute interview on Fox's "The Daily Briefing," but in just a few quick questions, Dana Perino pushes Betsy DeVos to show that during this pandemic, families with concerns about school are on their own. 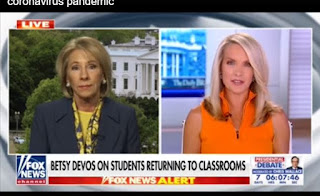 The spot opens with a quick clip from an Alabama infectious disease expert explaining that you kids "pose an even bigger risk than college students." Dr. Michael Saag warns  of a "silent epidemic" within K-12 arena. Saag says we knew what was going on in colleges because we are testing and quarantining, "but in K through 12 we're not doing that."

Perino asks: Do you have concerns as well about the younger kids that are going back to school?

I'm going to transcribe DeVos's non-answer in its entirety so that you don't think I cherry-picked my way around her actual answer to the question. Spoiler alert: if you've heard DeVos say anything in the past four months, this will all seem familiar, because "sticking to message": is one of her special skills:

Well, Dana, we know that parents across the country want their kids to be back in school and continuing to learn, and we know more than ever parents want and need to have choices and options for how that works and how that looks depending on their children. We know there is no perfect option, but there are lots of good options, and I've had the chance to visit a number of schools and districts where they've been, uh, leaning into this and really addressing the problems and the issues and providing choices and options for families.

Perino, who mostly maintains an old-school journalist deadpan throughout, responds: "So your level of concern right now is low."

DeVos drops her standard semi-smirk with a quick expression of "Oh, shit, that wasn't the message I wanted to get across," and leaps back in. But of course that is exactly what she's saying, and has been saying--there's no reason for parents to worry. I wish there had been time to ask her what she thought those "good" options might be, or what exactly she thinks people are "leaning in to" or what she thinks the "problems and issues" are, if not the threat of a deadly and debilitating disease possibly jumping through entire student populations. But she's moving on.

...[stammer]...It obviously depends on the geography, but in most places across the country, it is, uh, it is an imperative that kids be able to contin-- get back to school and learn. {Now she's back on her game, smile in place]. That for many kids in person is the right answer. But we also know that some families may be concerned about it.

Eyes down, Perino isn't really listening to this additional non-answer, but is cuing up her next question, which she actually interrupts DeVos to deliver. DeVos tried to get oput another "more than anything parents need choices" but Perino pushes ahead.

Perino brings up the issue of attendance, citing a New York Times report that attendance for online options is abysmal, and that online school fails to engage students. "Do you think that that gets better," she asks, "or is the only way to solve that is to get kids back in school?" Which is handing DeVos a softball on a silver platter, but DeVos can't quite get her bat around to it.

Well, again, I think having-- giving parents and families different choices and options to do what's best for their particular children is the answer now, and we're seeing lots of families creating their own solutions, but we know that there are lots through learning pods, through homeschooling, through microschools, through of a multitude of creative solutions, but we know that there are a lot of families that don't have resources to access those kinds of options, so now more than ever we do need to allow for and provide for parents to have those resources to make the best choice for each of their kids--

You'll notice that she isn't saying anything that she couldn't say and hasn't said in a world with no coronavirus. It is really unclear whether she thinks the "problem" is that there's a lethal disease loose in the country, or that there's just been a disruption of normal school activity by various regulators. It's not clear whether she thinks schools have been closed by the virus, or by state and local officials. But her resort to choice suggests she thinks it's the latter, that parents just need the choice to send students to one of those schools that isn't doing anything about the virus. Or maybe she just thinks better private options are free from all diseases. However you parse it, it's clear she's focused firmly on promoting choice and not addressing any disease-related issues directly.

Now she did admit that not everyone has the resources to do some of these cool option thingies, so Perino moves to the next obvious question:

"What is the department doing to help them?"

You already know the real answer, but here's how DeVos fills the time.

To help the kids--we are-- we are continuing to provide support and uh, uh, as much flexibility around the funds that the federal government has appropriated, and there's still lots of CARES act funds that have gone unspent that could be used for technology upgrades [and training, chimes in Perino]for new technologies, for, um, you know, for testing and and uh for uh cleaning supplies-- Whatever the need is-- for teacher professional development, whatever the need is, there are resources there to be drawn from. But again, it's just an imperative that kids--all kids have the opportunity to be learning full time in an environment that works them.

There are so many things that DeVos could have said in an interview like this, like "We know that the disease is very scary, and as we learn more about it we are taking aggressive steps to protect students and staff so that parents can feel more secure" or "We are mobilizing all sorts of resources so that if schools decide to do distance learning, we'll back them up with technology and training, and if schools decide to open, we'll back them up with the latest guidance and with PPE and supplies to help them out" or even anything that starts with "I have a plan, and here's how it goes..."

But that's not what's happening here. There's no plan, beyond "let the parents sort it all out." Maybe we're just seeing the limits of the Federal Hands Off philosophy. Or what we're seeing is what lies at the heart of the voucher philosophy-- we want to give you some money and after that, you're on your own. After we shoot you some funds, we wash our hands of you. We want to make sure you have choices, but we will not take any steps to make sure that those choices are any good. That's your problem.

But as far as schooling during the time of coronavirus, DeVos has made it clear yet again-- parents, students and teachers are on their own.

(You can watch the video here. It's almost worth it just for DeVos's library of facial expressions and Perino's eye snaps)
Posted by Peter Greene at Wednesday, September 23, 2020