If someone has a pipeline to the campaign, please feel to send this along.

I know that this evening, you have your hands full with the Great Orange Loon in Cleveland. But you've got an education flavored fundraiser tomorrow night, and we really need to talk. 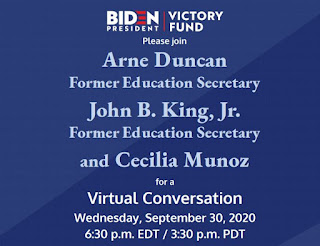 It might have been of interest to educators, except, of course, the price of admission is, well-- a "champion" ponies up $5,600, and on the bottom end, an "attendee" pays $100. I mean, I was sorely tempted, but as a retired teacher with two toddlers at home, I don't have $100 to spend on something that will probably horrify me anyway.

Because here's the thing.

I really cannot state strongly enough how much actual working classroom teachers don't really like or trust Arne Duncan. Truthfully, they mostly don't know John King all that well--unless they're from New York, in which case they still have a bitter taste in their mouths from his disastrous tenure there.

I'm sure your campaign has a lovely working relationship with union leaders. But the rank and file, the teachers in the trenches, the people who represent millions of actual votes-- they are not so sure.

Your previous boss broke our heart. We thought he was going to reverse the disaster that was No Child Left Behind--instead, he doubled down on the worst parts, like high-stakes testing. And Duncan was a disaster--one more guy who had never taught and who championed the pushed-from-the-top-down fiasco that was Common Core. Duncan's whole premise seemed to be that teachers were slackers who didn't know their jobs and/or lacked the drive to really do their jobs. He was insulting, demeaning, and the champion of too many bad policies, and to this day he has failed to take responsibility for any of it.

He was not a champion for public education or the people who work there. I cannot type those words hard enough.

It is not enough to pledge to put a teacher in the job education secretary's job. Public education has been a political orphan for far too long, spurned by both Democrats and the GOP; from the classroom vantage point, there has been no serious change in the disastrous direction of the department in decades, regardless of administration.

So we really, really want to see something that shows you are actually listening to the people in public education, that you recognize mistakes of the past, that you are prepared to chart a new course. This event signals the exact opposite. This sort of thing will not inspire public school teachers to support you.

Suggestions? Have a town hall with actual public school teachers (and not just ones who have been carefully vetted to be agreeable). Talk to them. Listen to them. Say some version of the words, "This is what we got wrong in the Obama years, and here's the course correction I propose." And leave Arne Duncan to continue pulling down big salaries at various thinky tanks. Because you can talk about kicking Betsy DeVos to the curb, but as long as you embrace the second-worst secretary of education that teachers can remember, the DeVos tough talk isn't going to stir up much enthusiasm.

Feel free to give me a call. Like many other teachers, active and retired, I would love to see you succeed--but I would also love to see public education finally get real, useful support from the federal government, and not just more of the baloney we've had shoveled at us since the Reagan administration commissioned A Nation at Risk to attack American schools. Give us a reason to support you with a slogan more robust than this one: 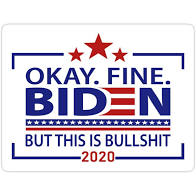 I'll let you know if I hear anything.
Posted by Peter Greene at Tuesday, September 29, 2020
Email ThisBlogThis!Share to TwitterShare to FacebookShare to Pinterest