Richard Woods was elected state superintendent for Georgia in 2014. He's a Republican, but what makes him special among stat education bosses is that prior to his election, he spent twenty-some years as an actual honest-to-God educator. Not some Teach for America insta-expert, but an actual fourteen years in the (rural) classroom (HS social studies) then another decade as an administrator educator. He's even married to a thirty-year veteran teacher. Yes, there's still plenty of charter school foolishness loose in Georgia, and Kemp is still their governor, but when I read what Woods has to say in interviews, I get the impression that he actually remembers what he learned as a teacher. Things like how teachers are the only professionals who have to outfit their own workspace, and what it will take to recruit and retain them.

Woods ran, twice, on the idea of radically reducing Georgia's massive testing requirements. He ran literally on "students are more than a score." And he made some real progress. So when the world turned to viral crap last spring, Georgia was first in line to suspend the test, and right there asking the feds for a waiver to excuse them from the Big Standardized Test requirement. 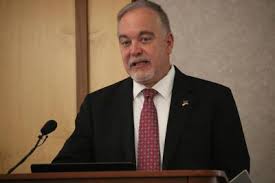 They were already angling for one this year, because it's fairly obvious that 1) this year's results won't mean bupkus and 2) the time spent on test prep could be better spent on life prep.

But Betsy DeVos has signaled that she's n ot doing that waiver thing again, right after Georgia became the first state to ask for one for 2020-2021. Woods said he was disappointed. Well, actually, he said, "It is disappointing, shows a complete disconnect with the realities of the classroom, and will be a detriment to public education."

But, he said, nobody needs to worry. He had a workaround.

He announced his plan and it appears on the agenda for the next state board meeting. While Georgia usually counts the Big Standardized Test for 20% of the student grade, Woods proposal is that this year they count for 0.01% of student grades (lawmakers won't allow him to throw it out entirely). From AP coverage:

“Georgia will abide by federal law, but we are not going to layer additional stress and burden onto our students and teachers during this time,” Woods said in a statement Thursday. “In this environment, these tests are not valid or reliable measures of academic progress or achievement, and we are taking all possible steps at the state level to reduce their high-stakes impact.”
It's an elegant solution to a problem that shouldn't exist. The Georgia Education Association applauds  the move favoring "compassion over compliance," and hopes that the Governor likewise suspends teacher evaluations (teacher evaluations based on a test that has zero student consequences are baloney). GeorgiaCAN, the state's arm of the ed reform octopus sticks to the talking point that these tests are creally necessary for finding out where students stand and what they've lost because a once-a-year narrow standardized test is so much better for that than the professional tools and judgment of actual classroom teachers.
It's a great solution, and one can only hope that it spreads to other states this year, and perhaps in gthe years to come.