Betsy DeVos visited a private school in Grand Rapids that is currently open for face-to-face school, and she observed that not re-opening school buildings is a "tragedy."

This seems like a radical shift of direction for the secretary of education. For one thing, one of her mantras has been that we should fund students, not institutions or, presumably, the buildings in which those institutions are housed. DeVos has also been a huge advocate of computer-run education, insisting that the modern miracles of technology should set students free from traditional school-in-a-building. 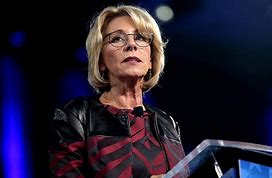 But with the advent of the pandemic, DeVos seemingly shifted gears, going so far as to threaten public schools with funding loss if they don't open up right away. And here she was in Grand Rapids, praising a private school that opened up and sadly castigating public schools that haven't.

So did Betsy DeVos suddenly change her mind?

That seems unlikely; DeVos is nothing if not singleminded and focuses. Tales of her career in education reform do not include any sudden epiphanies that lead to a new shift or focus. So how to explain this sudden apparent 180 degree flip. Let me offer a couple of theories.

One theory is that she is simply following Trump's lead, and Trump on education (as with some other policy areas) is best understood as the cranky old grampaw who thinks the world would be a lot better if everything was the way (he thinks) it was Back In His Day. Though DeVos was not a Trump fan back in 2016, she has become a solid team player for her boss, one of the few who has never, ever suggested that some chunk of dumb just fell out of his mouth. .

But just as likely is that DeVos is doing what she has always done--taking whatever position best supports privatized education. Pre-pandemic, when public schools were open for face-to-face instruction, she could criticize them for not having changed for a century, for being the same old dead end, thereby promoting the notion that folks should get out of public school and into a private school with cool modern techy things etc etc etc.

But in the pandemess US, public schools have, in many cases, shut their doors and deployed all sorts of 21st century gimcracks and geegaws, she needs something else to criticize them for. If she can get them to open up in traditional style, then her old criticisms can still be used. Plus, since nobody on the federal or state leader has offered up the leadership, guidance, resources or money needed to make opening up in a pandemic really work, she has the security of knowing that more public school failures are sure to follow. And if they don't open back up, DeVos can (and has) criticize them for not providing Real Schooling, unlike these nice Catholic schools over here that are open for face to face instruction. Plus, failing to re-open helps DeVos leverage the idea that public schools should be defunded and families should just get education vouchers.

In short, there is no hypocrisy or flip-flopping here. DeVos has a few solid principles that stay in play. Anything that helps private edu-businesses is good. Anything that makes public schools look bad is good. The pandemic has provided several win-win scenarios for DeVos; they only look inconsistent if you aren't looking in the right direction.
Posted by Peter Greene at Thursday, September 17, 2020
Email ThisBlogThis!Share to TwitterShare to FacebookShare to Pinterest