Arne Duncan said many not-so-swift things, often revealing his true attitudes about the dismantling and privatization of public education. But one of his truly revealing moments came in 2010 when he famously argued that Hurricane Katrina was "the best thing that happened to the education system in New Orleans." For the many Black teachers who lost their jobs to Teach for America tourists, and the families who have had to navigate a fully privatized but never organized system of charters and private schools, that may sound a bit wrong. 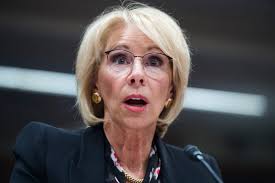 Betsy DeVos came into the office billing herself as a sort of anti-Duncan. The feds would not impose on state control of schools. The department would not be the national school board. Right off the bat in her confirmation hearings, she made it quite clear that she could not imagine a case of discrimination against students that would move her to take any sort of action whatever.

But since the pandemic hit, she has become really comfortable with using the levers of the department to push her own policies for vouchers and defunding public education. Using department rules to rewrite laws passed by Congress and using the federal purse-strings to extort compliance--Betsy DeVos has become increasingly comfortable with those tools, using them just like Duncan did.

But now she's added another Duncan touch-- saying the quiet part out loud. In an interview with Wharton Business Daily, DeVos characterized the coronavirus pandemic as a "good thing." Like Duncan, she's happy to see all the destruction because she's hoping it will let her rebuild her way.

P.S. She has also rebranded her Education Freedom tax credit school voucher bill as the School Choice Now Act, which I guess is a nimble pivot from one name to another for a bill that can't get Congress to pay much attention at all. This insistence that everyone else be a nimble pivoteer, while you are ceaselessly beating the same drum and paying zero attention to your critics is another Duncan hallmark.


Posted by Peter Greene at Tuesday, September 01, 2020
Email ThisBlogThis!Share to TwitterShare to FacebookShare to Pinterest