I have decided that the Center for American Promise has based its relentless (and senseless) Common Core promotional campaign on a game of whack-a-mole in which they play the part of the mole.

Here comes Carmel Martin, executive vice-president of policy at CAP (previously employed by the US Department of Education-- you can view her revolving door history here), writing a piece for Inside Sources, a website that seems to be a sort of clearing house for news from "policy and industry experts" aka "people who have a news story they want to have placed." But it totally worked, because the piece was picked up by Newsday.

Martin announces her intent with her lede:

The irony of the controversy over the Common Core is that proponents and opponents actually agree on much more than we disagree on.

I'm not sure what the "irony" of the controversy is, really. That Common Core backers never thought anyone would argue with them or resist? That they are being sold as higher standards that will prepare students for college and career when there's no actual evidence they do either? But hey-- let's hold hands, start strumming our ukelele, and see what it is that we all agree on.

First, "we all agree" that America's students must be prepared to thrive in today's competitive global economy. Do we all agree? Because I bet some of us think that some folks think there's something wrong with an economic vision that chews people up and spits them out. So maybe some of us agree that rather than preparing students to resist being poisoned, we might strive for a world less steeped in poisonous atmosphere. Just saying. So are you wondering yet if Martin is a parent?

As a parent and a policy leader, I want every American child held to the same high expectations as students in the highest-performing nations.

That is an interesting goal to cheer for, and it would be more convincing if Martin named just one successful nation that can credit its success to "rigorous" national standards. Heck, go ahead and name a country that has such standards. But Martin doesn't back up her assertion for the same reason that she doesn't include a pull-quote from a Yeti that she interviewed on the back of a unicorn.

Next we get a recap of the history. Let's cruise past all the landmarks. Look-- there's "A Nation at Risk," announcing that America was on the verge of collapse because of our terrible education system. That was 1983-- you all remember how the last thirty years have been marked by America's collapse and fall, right? Just how long does "A Nation at Risk" have to keep being wrong before we stop citing it as an authority.

Also, Martin adds, remediation rates. She says that only one third of students are proficient at math and reading and while she neither indicates which students or where that figure came from, she doesn't really need to because does anybody, looking around at live humans in the world, believe that only a third of Americans can handle math and reading? Also, achievement gaps, supported by more-- oh, no, wait. Still no sources or citations for any of this.

Are we getting to the parts of Common Core on which we all agree, yet? No, now it's time for the paragraph about PISA, chicken littling our international test scores because those test scores have been linked to... well, the scores on the tests.

Anyway, back before the Common Core, each state had its own standards. And that was bad, because reasons. Still nothing that we all agree on.

Now Martin shares some fictionalized history about the origins of Common Core; states recognized the problem and "banded together to create the Common Core." I always wonder what audience CAP imagines when they spin their SF PR yarns; apparently Newsday is read primarily by folks who live under rocks.

The new standards made it possible to compare results from one state to the next and enabled parents, teachers and school system leaders to know whether their students were really on track to graduate ready for college or a career for the first time in history.

No, you don't get a lick of proof for any of the absurd notion that A) such foreknowledge is possible, no matter what path a student chooses or B) that anyone has a clue how to know it. This would be a good place, now that we are so many years into Common Core deployment, for Martin to report how much better core-ified graduates are doing at colleges and in their careers. But she doesn't do that.

We do get a whole paragraph about how math is now wider and deeper and more conceptual. Then it's on to implementation excuses and noting that teachers are still "internalizing" the standards.

But the bottom line is that the Common Core addressed a vital and longstanding need to better prepare all students to graduate from high school ready for college and careers.

Yes, the premise that we all agree about Common Core stuff, the actual lede of this piece-- it didn't survive past the first sentence, and Martin does not even pretend to circle back to it for her finish. Instead she sticks with the classic reformsters formula-- there is a problem, so this is a good solution. Your spleen has exploded, so you should hold this frog over your nose under a full moon. Your house is on fire, so you should let me run a bulldozer through your living room. A bicycle, because a vest has no sleeves.

If you want to sell me a solution to a problem, don't just yammer about the problem. Show me how the solution will fix it. That's what the best salesman needs to do, and Martin, like the rest of the CAP infinite PR flackery department, fails to do that. Maybe the idea is that if they just keep peeking up their plastic heads, we'll eventually get tired of whacking away. Doesn't matter. Whether anybody hits it or not, it's still just a plastic mole head, with no heart, no guts, and no real substance hiding behind its tired plastic surface. 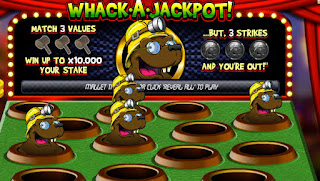