Surprise! Never mind Sanders or Warren. Just like that, the charter supporters have found themselves abandoned by the Trump administration.

The Trump budget axes federal support for charter schools, rolling the federal money for charters into a big fat all-purpose block grant, a big chunk of money retrieved from various programs that have been deemed redundant and ineffective. States will now get a big pile of money that they can spend on a loosely defined bunch of Education Stuff. 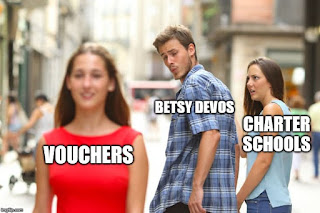 If they want to spend some of that on charter schools, they can. But by combining the various program moneys, the feds have now put charters in the position of having to compete on the state level against other programs for things like education for homeless children (you can see more of the details here in the department's budget summary).

Charter folks are not happy. National Review gave Nina Rees (President and CEO of the National Alliance for Public [sic] Charter Schools) a bunch of space to count all the ways she doesn't like this, from leaving families with fewer options to it would give too much power to folks who are against charters to, well, this fairly honest statement from Twitter


So “finding the courage to do something different” means keeping or increasing funding for programs like Indian Ed and Voc Ed but throwing away a program that helps entrepreneurs access funds to open innovative new public schools ⁦@BetsyDeVosED⁩? https://t.co/xw4gTujnfY
— Nina Rees (@Ninacharters) February 11, 2020

This doesn't come out of nowhere. DeVos has always been pretty clear that she's interested in vouchers, and sees charter schools as mostly a way to crack open the public school system. You may recall that some charter advocates were pretty unhappy about the DeVos nomination, and that DeVos made some efforts early on to deliberately build bridges to the charter school world.

But DeVos's heart is with Education Freedom, her big fat tax dodge voucher program. And a block grant approach certainly throws power over many of these programs back to the states, another DeVosian goal. (And yes, it's technically Trump's budget, but if he can explain any portion of the education slice, I'll eat the keyboard on which I'm typing this).

The politics of this move are not entirely clear-- DeVos and Trump just made a lot of people angry who had gotten used to being Trump supporters, and Trump's budgets always include lots of  big plays that the Congress then completely overules (like the annual Special Olympics cut). So the end result may be pissing off a bunch of allies for nothing.

But in the meantime, DeVos has shown her hand. One of the ironies here is that charter schools, by repeatedly trying to claim the undeserved mantle of "public" schools, may have put themselves on the wrong side of a secretary of education who thinks public schools suck. But if this budget move actually sticks, charter school advocates will find themselves battling on several flanks and public school advocates will have a new opportunity to curb charter growth. No matter what, charter fans now can see who their true friends aren't.

Posted by Peter Greene at Tuesday, February 11, 2020
Email ThisBlogThis!Share to TwitterShare to FacebookShare to Pinterest