Betsy DeVos may not be the most effective or qualified secretary of education ever, but she sure has managed to become the most famous (go ahead-- name five other education secretaries). And that fame is so very two-edged that she appears poised to be a major fixture on all sides of this year's election cycle. 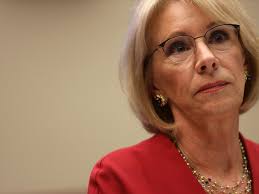 On the one hand, she has been tapped to be a card-carrying Trump surrogate, and is apparently a big hit with the base. She's a perfect spokeswoman for the axis of free market Jesus, with a strong libertarian "let's burn down the government" streak, and she is not one to wander off message. And she has always been properly deferential, almost never plugging policies like her beloved Education Freedom tax dodge scholarship program without giving the President credit for being a huge supporter, even if he has no idea what the heck she's talking about. Maybe it's that she's a good party operative, or maybe she's naturally loyal, or maybe it's the knowledge that her family could buy and sell Trump a half-dozen times, so why not humor him? Hard to know.

She has one other secret weapon as an administration proxy-- she hasn't really accomplished all that much. Yes, she's pulled the department away from any support of civil rights, and yes, she's totally botched the college student loan forgiveness operation, yes, she's left her department fully understaffed, but it's not like she has redirected the department to funnel money into Trump properties or sold off valuable land or tried to personally profit off her office, like some other fine examples of the cabinet. It's not even like she's had to reverse herself of deeply held principles, like so many GOP members have had to do. In terms of actual solid accomplishments, there's just not much you can point at and either love or hate.

Not that it has stopped anybody. DeVos seems pretty easy for folks to hate. Even as she is being anointed as a Trump campaign surrogate, the Democrats have made her a surrogate of another kind.

The candidate field is filled with people who promise to fire her. We heard some of that in Pittsburgh in December in front of an education-focused audience, and it seems to have gathered steam. It's an odd promise to make--seeing a new President of the opposing party fill a cabinet with all new people is not exactly unusual. But some of the candidates really relish saying it, and audiences seem to relish hearing it. The polls suggest that it's the Democrats and not the Trumpists who have correctly identified the best campaign use of DeVos.

At the same time, my entirely unscientific survey suggests a slight uptick in "Betsy DeVos suck" articles, like this Teen Vogue op-ed from the AFT. Honestly, it's kind of weak sauce, but it's one of many reminders that DeVos exists, that she's part of this administration, and that she pisses you off.

It's a curious effect. Part of it is certainly her use of the bully pulpit as a pulpit from which to bully the very public education system that is theoretically in her stewardship. And she is certainly emblematic of the modern ed reform movement, which we might well call the Age of Amateurs, in which people who don't know what the hell they're talking about have found a dozen different ways to gather power over the education system in this country.

There's the smirk, the self-satisfied simper of a woman who is above All This, what people of faith sometimes call being in this world, but not of it. And while some folks have written off as dumb, she's not, and others of us get that she doesn't feel she owes anyone a straight answer. And it all comes wrapped in the "thinks she better than you" air of unearned wealth. It may not be fair, but it's easy to imagine that DeVos has a security detail to protect her from commoner cooties.

I don't hate DeVos. I think she's supremely unqualified for the job, her world view wildly wrong, and she remains a threat to healthy public education in this country, but she's my age, I've been around religious conservatives my whole life, and while I don't know her, I feel like I recognize her. I get why she inspires such rage-iness (and, to a lesser extent, why she inspires admiration in some quarters). I do question why Mike Pence, who is cut from pretty much the exact same cloth, but who has actually managed to cause more real harm, doesn't inspire the same sort of rage. Maybe it's because he hasn't repeatedly told millions of public school teachers they suck, or maybe it's the whole penis thing, again. I'll be happy to see her go away, though I think she has as much ability to do real damage as a private way-rich citizen as she does in her current job. Maybe more. But if she quit today, it certainly wouldn't affect my vote in November.

Whatever the case, it looks like we're in for nine more months of DeVos serving as both a punching bag and a cheerleader for Beloved Leader. What a strange new place we've come to, where a secretary of education is a big feature of a Presidential election.