So this is apparently the school choice lie that Trumpists are going to lean on:

“They want government control of everything — your health care, your wallet, your child’s education,” DeVos said. Democrats “want complete control over where, how, and what American students learn,” she said. “They want to close every charter school, take away every educational option from low-income families, limit choices everywhere for everyone.” 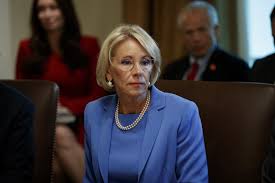 That was Betsy DeVos, the actual secretary of education, out on the campaign trail instead  of in her office again Wednesday. A government official raising the specter of government doing things, because thats where we are now, being represented by people whose most fervent desire is to burn down the house they've been given stewardship over.

It must be noted that this is also lying, a thing we used to generally agree was bad until we entered the current era in which whatever Dear Leader said is accepted as Truth by about a third of the nation. But a lie, nonetheless. There is not a single Democratic candidate for President who has proposed closing or even cutting off funding for currently operating charter schools.

DeVos was in PA with Vice President Mike Pence and I suppose that since we only narrowly went for Trump in 2016, we're going to be subjected to much more of this.

Jeanne Allen, a DeVos ally and chief executive officer of the Center for Education Reform, said that school choice is an “effective” political message for the campaign. “They’re sending her out to talk about an issue that’s visceral for parents who believe that things aren’t working and want something better,” Allen said. “Secretary DeVos isn’t a liability in communities where schools aren’t working for most kids.

I'm old enough to remember that fifteen minutes during which Jeanne Allen said of Trump, "I don't want my issues coming out of his mouth." Since her issues are gut public schools, destroy the teachers union, and more privatized choice, she has moved past that all the way to "a DeVos ally."

Not everyone shares Allen's enthusiasm. Jennifer Berkshire has traveled out to the midwest, and what she found was plenty of folks who don't mind Trump, but hate DeVos. Rural voters are very attached to their schools, and privatization is not a hit. So it's possible NEA president Lily Eskelsen-Garcia is correct when she says that sending DeVosm out to stump is a godsend for Democrats.

Certainly if she follows the Trump technique of saying stuff just because it gets a response and repeating a lie over and over in an attempt to warp the fabric of reality and keep the base alarmed-- well, we'll see.

Posted by Peter Greene at Thursday, February 06, 2020
Email ThisBlogThis!Share to TwitterShare to FacebookShare to Pinterest