Here's an opening sentence from a recent piece of charter advocacy from the74:

But charter schools and the new, more consumer-oriented public education landscape they represent are here to stay.

Well, no. I'm going to skip past the "here to stay" part, because what caught my attention was the "consumer-oriented pub lic education landscape" bit.

Because that's not what choicers have been pushing. What they have pushed, and established to a greater or lesser degree in many cities, is a business-oriented landscape for folks who want to sell an education-flavored product. 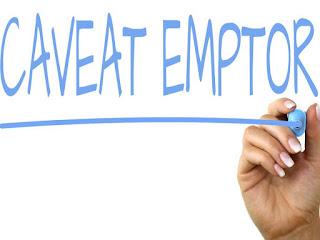 The rhetoric is relentlessly focused on the buyer. Let the money follow the child. Let the parents decide. They know the student's needs better than anyone. They should be empowered to make the educational decisions.

What this means is, "Give them the money and let them fend for themselves." Got a complaint, parents? Too bad-- we gave you your education voucher freedom savings scholarship account money. Everything after that was all on you. Caveat emptor.

Suggest that a choice system needs oversight and accountability, and you'll get the next round of rhetoric-- you think parents are stupid, you think poor people can't make smart decisions, you think people of color need to be kept powerless or they'll screw things up, that the government is going to make decisions for them.

It's a bizarre argument. If you want to treat education as a consumer good, why make it the only consumer good that is unregulated, the only consumer good for which there is no oversight. Should we let auto manufacturers make and sell vehicles that are defective death traps, or shut down the USDA and let meat packers sell us whatever they deem a good choice, and just assume that smart consumers will vote with their feet and wallets to put these folks out of business before too many people are killed? Is the Flint, Michigan water supply actually suffering from too much government oversight? That damn government-- taking away peoples' right to consume poisonous food and drink.

As I said, it's a bizarre argument. But then, that's because it's dishonest one.

Stupid is not the problem, and nobody thinks it is. The lack of accountability and protections for everyone except the businesses trying to make a buck-- that's the problem.

Here's one of a gazillion examples. Some folks who seem to have been nice people with pure intent set out to create a charter school in Detroit. But it was one damned thing after another. Too many authorizers authorized too many charters-- more than the market could support. They shopped for a company to operate the school. They borrowed aspirational goals from Success Academy. They got swamped with too many new students when other charters folded mid-year. They were struggling with staggering disciplinary and attendance issues. And three weeks into a new year, they shut down, leaving parents shocked, surprised and high and dry. (And maybe-- just maybe-- the market is not enhanced if customers have to check to see if accredited schools even actually exist!)

Nobody in this story was stupid. Parents were making the best decisions they could. But they ended up screwed over in a Michigan's privatized unregulated unaccountable choice system.

Parents don't need protection, regulation and oversight of a school system because they're stupid. They need those things because they are on the short end of a power imbalance stick. School choice, whether charter or voucher, has been engineered to be an asymmetrical market, a marketplace where families have access to only the information that the vendors want them to have. In fact, in seriously unregulated systems like Michigan or Ohio or Florida, the necessary information may be buried levels deep, with even the charters themselves not having necessary information that authorizers or charter management organizations have.

Asymmetric information is a free market feature; if I'm selling, it's to my advantage to have information that you don't. The actual problems of my product, the relative virtues of other products, details of pricing. Think of how airlines obscure the real cost of their service. Think of how the internet completely leveled pricing in markets like used cars by crushing information gap that had previously fueled the business. Marketing is not about providing potential customers with clear, complete, full information; it's about getting them to focus only on the information you want them to see, spun the way you want them to see it. (And, occasionally, it's about just plain lying, because maketing is about many things, but radical honesty is not one of them.)

Too many school choice fans want to pit a well-financed marketing machine against parents who are already strapped for time and attention and are now required to find the time a resources to ferret out all the pertinent information about a dozen different charter schools, all hidden behind an opaque unregulated curtain marketing woven out of promises that may or may not be related to reality.

If this were really a consumer-oriented system, we would be awash in regulations and rules designed to protect the interests of the consumers, instead of a system in which choice advocates demand like Betsy DeVos demand that businesses be free to operate without rules or restrictions. "We set out some choices, but we offer no guarantees about any of them. You sort it out yourselves," is not the motto of a consumer-oriented system.

This rhetoric relies on another falsehood-- that parents are the "consumers" of education. But the consumers include the students, their future employers, their future neighbors, their future society as a whole. Their interests are not served by a school that teaches that the earth is flat or that certain races are inferior.

Someone has to look out for the interests of the students. Yes, the vast majority of parents are committed to their child's best interests. But a small non-zero number of those parents are not well equipped to do that , and an even smaller non-zero number are not committed to their children's interests at all. Every teacher has stories. The father who decided that now that he had a new family and a new child, he could abandon the old one. The parent who sent hi daughter to school exhausted because she couldn't sleep in a home that was unheated because the utility money went to buy beer. The parent who tried to kill her child by hitting her with a car. These stories are not common, but they are not n on -existent either. Any system that does not provide a means of watching out for those children is a dangerous system.

Yes, the public schools at times can fail miserably in some of these respects. But it is not clear to me how it's an improvement to implement a system that doesn't even try to deal with it, that just shrugs and says, "The parents will sort it all out."

Nor are parents empowered in a choice system. "Vote with your feet" is a crock; hundreds of people vote against Success Academy with their feet every year, and Eva Moskowitz is not wringing her hands and trying to find out how to lure them back.

And yes-- it's worth acknowledging that yes, rules and regulations and "protections" can go way, too far. You don't really have to clarify that for people who work in the red-tape-draped halls of public education. That tension between regulation and freedom, between protection and liberty, has always been present in our society. Such issues are like piano strings; the instrument of society only functions if the tension is there.

The dream for too many choice advocates is a system built around unfettered businesses, unrestrained by voters or the government or unions or rules and regulations. But to sell this they must keep retreating behind parents as a shield, deflecting all criticism of their system as an attack on those parents. And all the slogans in the world about parent power don't change that in a choice system, parents have far less power than the private businesses hoping to profit from them. Vouchers, the preferred DeVosian choice, are the worst. The news about LGBTQ discrimination among Florida voucher schools is alarming for many reasons, but it most especially underlines one big truth about voucher systems-- parents are n ot "empowered" to choose. The choice remains with the operators of the private schools.

The biggest irony is that it doesn't have to be this way. Charters do not have to represent or embody a business-oriented approach to education. They do not need aa foundation in free-market business-style approach to exist, and would be far more beneficial if they did not (vouchers are another level of problem, and likely could never be implemented in a way that wasn't destructive to public education).  There is no need to replace the promise that every child in America should get a good free education with the promise that every entrepreneur should get the chance to make a buck from education. Parents should not be abandoned by the education system, nor is it an improvement to suggest that they be given a voucher in exchange for ever laying a claim to the quality education that their children are owed.

Posted by Peter Greene at Tuesday, February 18, 2020
Email ThisBlogThis!Share to TwitterShare to FacebookShare to Pinterest