In the entire education ocean, cyber charters continue to be a festering garbage patch, and a recently proposed bill could clean them out of Pennsylvania.

It is not that cyber charters could not be useful for a select group of students with special needs. But in the whole panoply of failed reform ideas, none have failed harder and more thoroughly than cyber charters. In fact, they have failed so hard that among their opponents you will find many supporters of bricks and mortar charters. CREDO, the clearing house for choice friendly research, found them hugely ineffective. Their problems are legion. Even The 74, a generally pro-choice site, recently took a hard swing at cybers. In at least five states, cybers are being shut down. 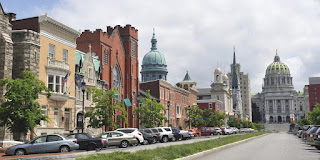 But in Pennsylvania, it's still cyber-Christmas. Pennsylvania has one of the largest cyber-sectors in the country, and provides no oversight or accountability? How little? No PA cybers have yet "passed" a single year of school accountability scores. One of the biggest fraudsters had to be caught by the feds. And perhaps most astonishing, we learned last month that ten of the fifteen Pennsylvania cyber charters are operating without a current charter agreement! In one case the charter expired in 2012.

PA cybers are huge money makers; they are reimbursed at the full per-pupil formula, but spend far less. So a cyber collects generally from $10,000 to $25,000 for each student, and spends a fraction of that on each student, pocketing the rest.

Several lawmakers in Harrisburg would like to put a stop to that.

Senate Bill 34's prime sponsor is Judith Schwank of Berks County, a former dean at Delaware Valley College who's been in the Senate since 2011. Her bill's principle is pretty simple-- if a district has its own in-house virtual school, it does not have to pay for a student to attend an outside cyber. If a family pulls a student from Hypothetical High and decides that instead of Hypothetical's own cyber school they want to send Junior to, say, K12 cyber school, then the family has to pay the bill-- not the school district.

“It’s crazy,” said State Sen. Schwank, of the fees districts pay to cyber charters. “It’s not based on actual delivery of educational programming.”

What the impact be?

Most school districts already have that in-house cyber-capability, either within the district or through the state's regional Intermediate units, and could start handling the cyber influx tomorrow.

How important would this be to school districts? Well, the commonwealth's 500 school districts paid about $454,000,000 to cyber schools in 2016-2017. So financially the impact is huge. There is also the human impact-- a large number of cyber charter students return to public school, academically behind (and if the charters hold onto the student past a certain date, they get to keep all the money but jettison the costs back to public schools). In short, the financial cost is huge, but the human and educational costs are incalculable.

Cybers are complaining that families could not afford the tuition, but then, the tuition is grossly over-inflated (the cybers have none of the expenses of a school with a physical school, yet collect the same funding as a bricks and mortar charter), so maybe they would go out of business or maybe they would have to cut tuition costs and lose their huge profit margins if they really wanted to stay in business.

How likely is it that any of this will happen? Well, a similar bill is slated for the House of Representatives by Republican Curt Sonney of Erie, who is now the new head of the education committee, so that's good-- but this bill has been raised in Harrisburg before, where it died a quiet death. Our GOP controlled legislature is not very public school friendly. And when you are making truckloads of money, you can afford some pretty aggressive lobbying. Just two companies-- K12 and Connections-- spent tens of millions of dollars over fifteen years to keep legislatures friendly, and plenty of that has been spent in Harrisburg.

And yet. And yet.

The drumbeat about charter funding general and cyber charters in particular has been heard in this state for years now, particularly from local boards of all political stripes who are getting tired of taking heat for decisions made by the legislature (I have heard more than one board member express "They yell at us for mismanaging the money, but it's the damn state!" There's no reason this couldn't be the year we hit a tipping point. There's a big state push for full funding for public schools and if your representative wants to ask where he's supposed to find the money, well, there's a whole big pile marked "cyber schools" that is essentially thrown away.

So if you're in PA, contact your legislator and tell him the time has come to pull the plug on the most failed experiment in education. Tell him to put the taxpayer's money back where t belongs-- financing public schools.
Posted by Peter Greene at Friday, February 15, 2019
Email ThisBlogThis!Share to TwitterShare to FacebookShare to Pinterest