It's tax season, so it's time for this sort of meme-- 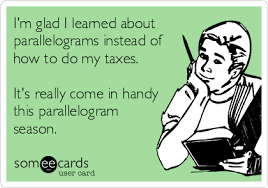 The answer, of course, is that we have no idea. Maybe life will take you to a place where you need to pick apart sentences. Maybe it never will.

When I was teaching, I had three main responses to this general complaint. Here they are-- and you can feel free to use them, because until the Board of Directors and my grandchildren get a little older, I won't be using them for anything.

Nobody ever said, "Dammit-- I wish I hadn't learned so much. Being educated totally messed up my life."

Most of our athletes spend a ton of time in the weight room, even in the off season. Why do they do that? Has anyone ever been at a football game and the play action totally stopped so that they could bring a bunch of equipment on the field so that the teams could have a bench press competition? Of course not. Operating those weight machines is a skill you will never use doing an actual game, so why bother going in for weight work?

The answer's obvious-- you won't use those particular weight machine skills, but you will absolutely use the muscles you developed. I was an English major in college. I took some advanced math in high school, and I have never used it since I took my last algebra test in 1975. But I do use the muscles I developed, the mental math-flavored thinking that becomes another tool for picking apart and taking in the world.

Every course develops a particular set of muscles, muscles that you can continue using long after the coursework is done.

Consider the game that was played last week. It was just that two minutes of play that determined the outcome. So why waste time playing the whole game. Next time we'll just play for two minutes-- you know, the two game-deciding minutes. We won't waste time on the rest of it.

Of course, we can't. Nobody has any way of knowing ahead of time which moments will be the critical ones, or for that matter, how much those two minutes were influenced by the other "unimportant" minutes.

This is life. Some moments are unimportant, some are very important, and some change everything, and despite our best efforts, we can never know ahead of time which are which. Any attempt to fix school by paring it down to "just the important parts" is a fool's game. Or to put it another way, it's not possible to really educate people without seeming to waste time.

Bonus round: The more educated you are, the more jokes you get.