China: You Will Wear Big Brother

If nothing else, China is constantly providing new responses to the comment, "Well, there's no way anybody could actually do that."

What happens when the business mindset comes up against a powerful profit motive? China has provided continuing examples of how business-driven enterprises will sacrifice almost any of their principles when confronted by the opportunity to tap a huge market. 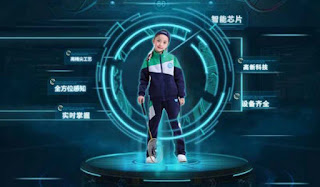 What becomes of all that data that tech companies collect further down the road. If the company tanks, what happens to its store of data which is, after all, one of its corporate assets? We're testing that this very year, as a Chinese giant purchased Edmodo, a company that had acquired-- and continues to acquire-- huge banks of student data.

And when writers raise the alarm about a future in which our identities are banks of data stored on the web and used by corporations or governments to determine our futures, before you can even start to mock them as tin-hat crazies--well, look. China is already doing it, with a system that tracks your every movement, scores your life according to government-set standards, and awards you privileges, or not, based on your life score.

But that surveillance system depends on facial recognition and cameras everywhere a camera can be mounted. How could the surveillance web be made even tighter?

How about wearable surveillance?

And voila- China is there already.

They've been there, in fact, since 2016, when several schools in one province began requiring students to wear "smart uniforms," school uniforms that include two chips that allow authorities to track students every move. The idea is supposed to be marking the attendance of students, indicating when they enter and leave schools and providing that information to the school, parents, and anyone else who might care.

The uniforms are actually a redundant system- student chips are checked against facial recognition systems, so trading uniforms to play hooky is a non-starter. And while officials say that they only track school attendance, the tech is perfectly capable of checking student locations any other time of day. But officials are totally not doing that.

We live in scary times, when the technology that we let loose in schools can accomplish some really awful things. If you read warnings about such things, before you dismiss them, check China first. They may already be real.
Posted by Peter Greene at Tuesday, January 01, 2019