David Coleman, he who single-handedly built the architecture of Common Core ELA in the image of his own (untrained) biases about how language should be taught, is taking a step back from some of his College Board duties. That news has been accompanied by further evidence that the SAT is increasingly pointless. 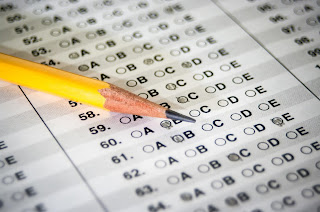 Like most of the CC architects, isn't stick around to make sure his baby was properly installed and put to use; instead, he moved to start cashing in, which in his case meant a lucrative gig at the College Board, the folks who bring us the SAT, PSAT and AP courses. He's been serving as both president and CEO of the company, but last week he stepped back from the president spot and the company installed Jeremy Singer in the post.

Singer is a fine fit. He's been the COO at College Board since 2013; before that he was with Kaplan, the test prep people. His career also includes a stint at McGraw-Hill, a school turnaround outfit, and a web-delivered solutions company. This after he started out in the business development biz, highlighted by a stay at McKinsey.

Digital baloney and business growth are his things, so it's not surprising that announcements of his rise focused on the "technological transformation" of the College Board. But some of the comments in this EdSurge article are not very inspirational.

Some probable goals: expanding the "partnership" with Khan Academy, simplifying the college application process, and "easing the financial burden" of applying to colleges. So, I don't know-- lowering their prices?

But then Singer also offers observations like this. Reflecting on his time with Kapplan, the test-prep giant:

His experiences had revealed how inaccessible commercial test prep was for low-income students, and it instilled in him the idea that “great test practice should be available to all students, not only those who could afford it,” he says.

You know what would be really great for students? A test that measures something other than how much test prep you did to take the test. Singer was the one who Khanified the AP tests, and other CB officials think that's swell:

“The Khan Academy partnership really makes it possible for students to access high-quality learning that they didn’t have before,” says Kaine Osburn, chair of the finance committee for the College Board’s board of trustees and superintendent of Lake Zurich Community Unit School District 95 in Illinois. “The test prep market was inequitable, and now it’s equitable.”

Emphasis mine, because weren't students supposed to have access to the high-quality learning of an AP course, generally taught by teachers have been trained to teach AP courses? Are you telling me that students don't need to actually take an AP course-- just watch a bunch of Khan Academy videos? Are you telling me that a video provides more "high quality learning" than a live human teacher? Yes, videos can be useful for certain types of instruction, but if I stood in front of a class, delivered a lesson, and then, when students asked questions, I just delivered the exact same lesson again-- well, nobody would be hailing my high quality instruction.

Another big Singer goal is to "boldly reduce complexity," and he has a point in saying that the College Board has used lots of complicated little ideas that mostly just reduce transparency of the whole business. Singer reduce some of this. The stated goal is to make applying to college less scary and less complicated. Of course, a really good way to do that would be to apply to a college that didn't require SAT scores at all. But the College Board isn't that interested in making college application simpler.

The College Board is a business, not a public service organization, so many of these simplification ideas look suspiciously like market capture ideas. For instance, the College Board has been working with the Coalition for College Application (a collection of 140-ish colleges) to set up a system by which students can submit SAT scores and college applications through a single site. This helps cement what has always been SAT's greatest marketing tool-- the perception that taking the SAT is one of those things you have to do to go to college.

EdSurge noted that ACT has been expanding its reach through acquisitions. It's an interesting question to ask Singer, who arrived at McGraw-Hill because the publisher acquired a company he was running. His reply is that College Board prefers partnerships; he mentions AIR and Pearson, though he might also have mentioned the College Board's success in getting some states to use the SAT as their required Big Standardized Test. He also talks happily about how these days, they are happy to be competing with the Big Boys for tech department talent.

At no point in the article does he talk about working to make the SAT a more accurate and useful measure of student academic ability.

But that's the SAT-- a test that mostly measures student socio-economic background and, of course, how well the student has prepped for the SAT. It is one of the great testing tautologies in the US education scene. Meanwhile, the best measure of college readiness and predictor of college success remains a student's high school GPA.  I don't want to see the 1,700 people at the College Board hungry and out of work, but I still have to wonder why we're still bothering wit the SAT at all.