DeVos Offers Advice From Within The Bubble

Betsy Devos is rich. She was born rich, married rich, and barring any French Revolution style upheaval, she will die rich. This does not automatically make her evil, but it does make her susceptible to life in a bubble-- particularly since she never created nor ran any of the businesses that made her wealthy. And it's important to remember all this when she starts waxing rhapsodic about the lessons she learned growing up back in the day.

DeVos returned to the public eye this week, wheelchair bound from a broken pelvis that was the result of a biking accident (that has got to hurt like hell-- good thing she has good health insurance) to have a "fireside chat" about youthful entrepreneurship. It was a chance for her to show that she has some awareness of what life is like outside the bubble. 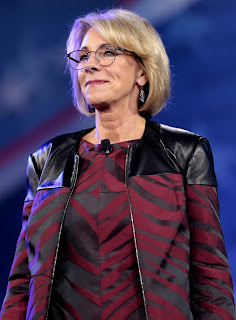 So there she was at Gallup HQ for Lemonade Day to talk to Joe Daly of Gallup to talk about the state of youthful entrepreneurship which, according to the Gallup folks, is not strong.

That's an interesting factoid to consider. And DeVos has some thoughts.

"Well,” she said, "you certainly are the ones with data, but I have some sort of instinctual ideas about it. I think they are quite broad and varied. For one thing, generally speaking, younger people have grown up in a more protected environment. We’ve heard lots about helicoptering parenting and making sure nobody gets hurt doing something, and we don’t take too many risks so we don’t fail.

“It’s a general aura of safety and security over taking calculated and taking interesting risks around things,” she said. "I think that in, that general aura has lent itself in many ways to that reality. I think that we’ve had sort of an ossified approach and system to track everybody through the same sorts of experiences and, you know, there’s not a lot of real difference in the way we do school today versus decades ago. It’s only more protected and more safe.

“And so I think generally speaking we have to become more okay with taking calculated risks and encouraging young people to try new things and to not protect them from everything.”

There are several things to unpack here. First is that Betsy Devos has never had to worry about serious failure her whole life, both because she has lived on a big fluffy white cushions stuffed with millions of dollars. Second, you can't have it both ways-- it can't be both school hasn't changed in years and kids these days are so much more protected than when I was a kid. Third, I feel certain that students in public school today are not more protected and cushioned than students in elite high-priced private religious schools were in the seventies. Fourth is that I guess we can give DeVos some marks for consistency in that she has been determined to roll back protections for at least some students.

And look-- I'm about the same age as Betsy, and I don't disagree that helicopter parenting and a general tendency to try to protect students from hurt and disappointment have been climbing. I'm just not sure what that has to do with the decline of entrepreneurship. The myth that modern entrepreneurs are profiles in courage seems, well, very myth. Take Bill Gates-- he certainly accomplished a big bunch of stuff, even if some of that accomplish amounts to appropriating the work of others, but the story of him starting Microsoft in his garage skips that it was his parents' garage, and they were well-heeled enough that he never had to worry that failure would leave him hungry and homeless. Or take a certain real estate mogul who got his entrepreneurial start with a few million dollars of his father's money, and then when his various adventures tanked, he was able to pull more money from Dad and God-knows-where-else. Have there been US entrepreneurs who risked it all on an idea? Sure-- but I'm not sure that a solid safety net and the comfort of security aren't as useful for entrepreneurial boldness as risk-taking behavior.

Do I have an alternative explanation? Well, two. One is that Gallup is simply wrong-- I'm not sure how one measures entrepreneurial spirit, anyway, but didn't we just go through a decade of a few thousand Zuckerberg wanna-be's trying to launch one internet entrepreneurial schemes after another? Daly suggests that we've had fewer people starting businesses that employ other people-- that may well be true. But if Gallup is right, then maybe the widespread economic insecurity and the same pit of debt that has kept millennials from buying houses has also made them reluctant to launch new businesses. Maybe they're financially scared about living in a world in which a bicycle accident could ruin you financially forever. Or it maybe that the conglomeratization of business just makes it harder to break in (everyone loves the free market until they're winning t it-- then they want the price of admission to be prohibitively high). The younger generation has grown up in a world where they've seen the rules clearly stacked against people who aren't already rich; maybe they're just not inclined to risk home and family on a very long shot.

This theory, of course, would not allow DeVos to blame one more thing on public schools.

There's a disconnect in her reasoning. After all, her own experience, both for herself and for her children, has been to avoid public school and stay in a comfortable private religious school bubble, and what is more helicopter parenty than saying, "We will find you a school that only gives the educational experience we want it to." What is more protected and safe than a school where everybody believes the same things you believe? And what is a significant part of the argument charters and vouchers if not a helicoptery, "If the public school won't teach our chid the way we want them to, we'll just go to another school that will."

Why didn't Betsy DeVos's parents tell her, "You're going to attend public school, and your allowance is five bucks a week, and this summer you're going to get a job at some place that the family doesn't own. It will be hard and unpleasant sometimes, but it will build grit and character and you'll be a better person for it later in life." Later in the talk she says she's encouraged that her grandchildren are being "encouraged to do the kinds of things I did as a child and to explore some unsafe things" and I'm wondering what "unsafe" thing Betsy Prince was ever encouraged to do in her youth.

Look, to repeat myself, I'm not suggesting Betsy DeVos is a terrible person because she as born and raised rich-- that wasn't her choice. But there is something seriously off about a person who has lived an entire life of comfort and privilege grousing that Kids These Days have it too easy. And when a person with a lot of power takes that stance, it's doubly unfortunate, because that means they'll totally miss the chance to do something useful. Gallup may be pointing at something significant here, but all we're getting from the secretary of education is the old Kids These Days are weak and public schools are lousy.

That and returning to the Other True Faith. More schools, she suggests, should teach their students about business, about how business works. I suppose it could cover how money talks and frees you to tell people How It Is without ever doing any self-examination.