Jay Matthews is an education columnist for the Washington Post, so he should know better. "I've been around," he says. Well, yes. Mathews was not always tough on Shee Who Will Not Be Named, but he did catch the echoes of the DCPS graduation scandal on the national level, even as the Washington Post completely failed to catch that story. 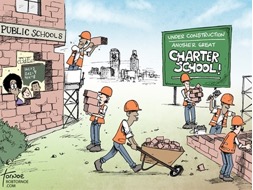 But last week Mathews' Been Aroundiness failed him in a wrong-headed rebuke of the California Teachers Association. He's responding to a new CTA radio ad. Here's the whole script for that ad:

They’re lining up against our local public schools. One after another, out-of-state billionaires are trying to buy our politicians. Following the lead of Donald Trump and Betsy DeVos, billionaires like Koch brothers allies Jim and Alice Walton have their own narrow education agenda to divert money out of our public schools and into their corporate charter schools. It’s true. Out-of-state billionaires investing millions into politicians who will protect corporate-run charter schools that lack accountability.

So as California chooses its next generation of leaders this election we must stand up to politicians who divert money out of our neighborhood public schools and say yes to leaders who value the promise of quality public education for all students no matter where they live. And leaders who always put kids before profits. Learn more at kidsnotprofits.com. Paid for by the California Teachers Association.

First of all, Mathews wants to trot out that old charter distinction without a difference. The spot, he says, implies that charters are all profit machines when in fact, he points out, 97% of California charters are non-profit.

This is a tired, tired talking point. It's true that for-profit charters, like cyber-school giant K-12, have committed their own sort of offenses against the state of California. But to imagine that non-profits are somehow less interested in the grubbing of money is simply counterfactual. Nonprofit charters are still businesses and are still focused on making money. True, since that money will be distributed as big fat wages or paid to for-profit contractors and not issued to shareholders, we're not strictly talking about profits. But it's a meaningless distinction. There are so many ways for non-profit charter schools to make private individuals and companies wealthy, and because California barely regulates its charters, California's charter sector is particularly vulnerable.

Take for instance the now decade-old case of California Charter Academy, a once-huge charter chain founded by Charles Steven Cox, a former insurance executive. Cox was founder and CEO the charter chain, and he hired a company to provide "management services" to the school. That company was a for-profit business, and its CEO was Charles Steven Cox.

That's the same self-dealing personal enrichment scheme used by Kendra Onkonkwo for her Wisdom Academy for Young Scientists in Watts. Or this Bay Area charter chain that used its right hand to pay its left hand.

You can find other classic examples of California charter-based profiteering in this report from In the Public Interest. These are not hard examples to find-- the techniques for using a supposedly non-profit charter to feed directly into a for-profit business (or a private pocket) are well-known and not particularly new at this point. And that's before we even get to issues like, say, increased segregation in California charters.

Mathews avows his dislike for for-profit charters, because "the best teachers I know want to help kids, not investors." He's an education reporter-- surely he understands that many non-profit charters are simply a protective layer between tax dollars and for-profit companies that collect the rent on the building, provide the educational services, and contract for other management functions. You know who's published some good pieces about this web of non-profit and for-profit companies? The Washington Post.

But Mathews is offended-- personally offended-- that CTA is spreading the scurrilous lie that charters are often in it for the money.

He'll throw around some more baloney in support of his point. For instance, charter schools are public schools. He's an education reporter, and as such, should well know that the best thing one can say about that assertion is that it's a highly-debated claim, and the worst thing you can say about is that it's a lie. Charters are privately run businesses that are paid with public dollars. He's also going to make the claim that charters cannot pick the applicants they want-- which is another careful construction. Charters can't pick who applies, though they can certainly use advertising-- paid for with public tax dollars-- to affect which families choose to apply. And they can (and do) influence who stays. He also wants to tell us that some research shows that African Americans and Hispanic students are doing better in charters; he does not discuss how that may simply show that charters have creamed successfully, nor does he discuss that "better" just means "scored higher on a single narrow standardized test."

Mathews angrily characterizes the CTA spot as "rubbish," but where's the rubbishy part? Billionaires want to divert public dollars to corporate coffers? Well, yes, they do-- surely he didn't miss the story about Eli Broad's plan to grab half the LA education "market" for charter schools. Do outside billionaires spend a bunch of money trying to influence local politics? Well, yesh-- surely he didn't miss the story about outside rich folks trying to crush the charter cap in Massachusetts and getting caught and spanked for cheating.  And what will Mathews make of the appointment of Austin Beutner, a Wall Street money guy with no education background at all (but lots of money) and limited LA ties as Superintendent of LAUSD?

Charter do divert money away from public schools. Charters do put money ahead of students, as witnessed by the number of times charters close down during the year for financial reasons. Charters are businesses; that does not make them inherently evil or destructive, but it does mean that financial concerns come first.

Yes, the CTA is guilty of some rhetorical corner cutting by using "profits" as shorthand for the various financial aspects of the charter business. But their spot is not rubbish and it's not counter to the truth. Mathews has used arguments that I would expect from someone who never reads anything on the subject but charter promotional materials. I expect better from an education reporter who has been around.
Posted by Peter Greene at Wednesday, May 02, 2018