How To Defeat Trump 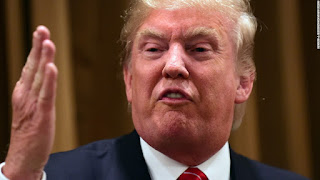 You cannot swing a cat on the internet without reading a "Looook at how much Trump lies and contradicts himself!" posts-- and yet nobody cares.

I think what best captures Trump's imperviousness on matters of truth, consistency, and decency is the slogan on a poster just down my street--

Trump-- Finally, someone with balls.

How do you qualify as someone who has giant brass balls? By showing no regard for the kind of social conventions involved in matters of truth, consistency, and decency. Every time Trump gets "caught" lying or changing his position, his supporters do not react with shock or disappointment-- they give each other high fives because their boy just flashed his giant brass balls again.

That line of attack is never going to work.

But then I was on the interwebs today, minding my own business, and I saw multiple reports of this.

Pundit-for-God-knows-why Bill Kristol let loose the mysterious claim that there will be an impressive independent candidate "with a strong team and a real chance." And then in less than two hours, Trump flipped out with another one of his reactive tantrums, calling Kristol names and squawking about the proper rules to play by.

Now, mind you, Kristol, who has almost never been right about anything, is undoubtedly completely full of it when he makes this claim. But that doesn't matter. Look at Trump-- reacting rather than acting and squawking like the tantrum-throwing toddler he is, not even looking like a grown-up, let alone an actual candidate for President. His followers probably won't care, but it cuts into his usual rhetoric, and it makes him look bad to everyone else. So I'm thinking, here's the campaign strategy for opposing him.

Lie. Lie about him. Lie at him. Throw lies in his general direction like Buddy-the-Elf-powered snowballs.

Kristol isn't intentionally lying--he's just always wrong-- but why not start with the lies? Have the GOP issue a press release that candidates whose last name starts with T will not be allowed at the convention. Pretend to be a repo man and repossess his car on the way to an event. Hire an ugly woman to announce that she gave birth to Trump's ugly child. Heck, hire three hundred of them. Announce that Cleveland will be closed for repairs all summer and fall because global warming has caused the lake to rise all the way to Superior. Announce that Trumps planes will not be allowed to fly because the Air Force has determined that alien spacecraft are attracted by his hair. Photoshop him into pictures showing him naked in a hot tub with Stalin. Hire a Trump impersonator to start issuing press releases as John Miller announcing that Trump's wife is leaving him because he's old and boring and has been impotent for years.

I'm not saying any of this would be ethical or right. But one of the abilities that Trump lacks is the ability to just let stuff slide off his ample back. And as all of his opponents have discovered, it is hard to maintain dignity while trying to defend yourself from stupid lies. To defeat Trump, Republicans, Democrats, and Americans who don't want to be led by President Asshat just need to find someone who will go after Trump with the same disregard for truth, consistency and decency. Not an alternative candidate-- ust a political operative who can squash Trump and then fade back into the shadows while our normal politicians resume their usual normal not-so-Trump-sized disregard for truth, consistency and decency.

Cross your fingers and let the lying begin.
Posted by Peter Greene at Monday, May 30, 2016
Email ThisBlogThis!Share to TwitterShare to FacebookShare to Pinterest