Is There an Education Uber?

This week at his blog Culture of Yes, Chris Kennedy asked "Is there an Uber coming to education?"

Kennedy rattles off a list of techno-changes that have broken into business in recent years. We buy books at amazon, not brick-and-mortar stores. We talk about netflix instead of cable. Kennedy reflects on flying into Denver and defaulting to Uber rather than a cab, and how, having recently discovered airbnb, he cannot imagine booking rooms the old-fashioned way ever again.

So he wonders-- will we keep tinkering around the edges of education, or is there a major disruptor coming there as well? Is there an education Uber out there?

There are many issues to consider with such a question. For starters, sooner or later we're going to have to deal with one common factor in all of these techno-disruptions-- they are all ways for wealthy folks to get services from non-wealthy folks for less money. These disruptors have created more jobs for the Just Scraping By economy. Amazon has made the world a better place for folks who have money and a desire to get what they want to get when they want to get it, but Amazon has made the world a lousier place for folks who have taken a job in an Amazon "fulfillment center" in hopes of supporting their family. These kinds of disruptions are here, and they're unstoppable, but it will help us as a culture if we can stop pretending that they have made a brighter, shinier future for everyone. 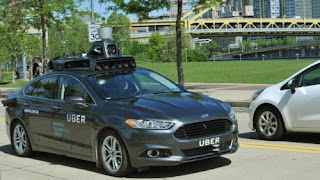 Techno-driven disruption raises other issues as well. We're buzzing in my neck of the woods because Pittsburgh is going to get autonomous Ubers, because why pay human beings a cent more than you absolutely have to. Autonomous cars have been coming for a while, and I will be excited about that just as soon as I own a computer complete with software that does what it's supposed to do every single time. So, roughly "never." An autonomous car, like any other piece of pseudo-AI tech, is simply a way for a programmer to impose his preferences, values, and biases. Somewhere in that autonomous automobile software is some code that says, "When you have to decide whether to hit an on-coming car or the child that ran out in front of you, here's what you pick." A car-directing software package is going to make moral choices based on its programming, and I'm not saying that the prospect is horrifying or Frankensteinian-- but I am saying we have to stop pretending that computers make cool, perfectly objective choices. They do not. They make the choices their programmers tell them to make.

Both of these points have huge implications for education. Will edu-Uber be paying more attention to those who are being served, or those who are doing the serving? And since the education of small live humans is absolutely saturated with moral choices, which set of programmers will be pre-making those moral choices and value judgments for the students?

These are both big issues, but they are not the biggest one.

Education is not a business. The purpose of of a school is not to make money.

Current reformster attempts to disrupt education all start-- must start-- by challenging that foundational assumption. Kennedy doesn't mention charter schools, but I would bet that many charteristas think they are the edu-Uber, and charter school's most fundamental change in the approach school is to turn it into a business, riding the wave of the Free Market and reaping piles of money to be directly (or more sneakily) diverted to the pockets of the charter operators. The purpose of a charter school is to make money (by providing an educational product to parents and students).

As always, I'm not trying to suggest that anything done to make money is inherently evil and awful and anyone who makes money at some business activity is a terrible person who should hang his head in shame.

But bringing a business perspective to public education represents a fundamental shift in the values and purposes of the institution.

In other words, an education Uber would not just change how we pursue the mission of public education. It would change our very conception of what that mission is. Uber didn't change the business of getting people from place to place-- it just changed who did it and how they were paid. But an edu-Uber would change the purpose of school.
Posted by Peter Greene at Sunday, May 22, 2016