School district officials in Sarasota and Manatee counties have completely lost any sense of what they're supposed to be doing.

There are areas of policy and practice in the education debates where reasonable people can reach different conclusions about what might be best. This is not one of those times. Some Florida school districts have simply and completely lost the thread. 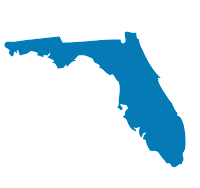 But Florida insists that its students take the BS Test, regardless. And Florida also has one of those sense-defying laws that says third graders who can't pass the reading test must be retained. It's a dumb policy for many reasons, not the least of which is that there isn't a lick of evidence that holding third graders back helps. And cooler heads seem to have prevailed last year when the Florida legislature, in a brief moment of lucidity, decided to suspend the rule and just let the actual local school where education professionals worked with the actual children-- just let those guys make the call.

But not this year. This year a third grader can have great grades, the recommendation of her teacher and principal, and the admiration of her peers-- but if she didn't take the BS Test, she will fail third grade.

Let me say that again. An eight year old child who had a great year in class, demonstrated the full range of skills, and has a super report card-- that child will be required to repeat third grade because she didn't take the BS Test.

What possible purpose can be served by this? Are administrators worried that the child might not be able to read? No-- because that is easily investigated by looking at all the child's work from the year.

This is punishment, not so pure, but painfully simple. Punishment for non-compliance, for failing to knuckle under to the state's testing regime. And in taking this step, the districts show where their priorities lie-- the education of the children is less important than beating compliance into them and their parents, less important than taking the damned BS Test.

Officials in these counties scratch their heads? What can we do? The law is the law. Well, in the immortal words of Mr. Bumble, "the law is an ass." And furthermore, just look across county lines at some other Florida counties that are NOT doing this to their third graders. Go ahead. Peek at their answer. Copy it.

Hell, Superintendent Lori White of the Sarasota schools is retiring in February of 2017-- is this really how she wants to finish up her time there?

[ Update: Meanwhile, in Manatee County, Superintendent Diana Greene has dug in her heels and declared that the state's directive is clear, and maybe those other counties are the ones that need to shape up and stop passing kids willy nilly. Manatee students may use an alternative assessment like a portfolio-- IF they take the BS Test.

Greene may well have read the state correctly. In the same report from the Bradenton Herald, Deputy Superintendent of Instruction Cynthia Saunders is quoted as saying, “We cannot promote a child based solely on the teacher’s report card in third grade."


There are times when the tension between test-driven schooling and education centered on the best needs of the children can be fuzzy, blurry, hard for some folks to see the dividing line. This is not one of those times. When you are planning to hold a child back a grade for absolutely no reason except that she didn't take your mandated BS Test, and when you have ample evidence and data about how well she learned and grew this year-- when you have reached that point, you have absolutely lost track of what you're supposed to be doing. You have lost your damned mind.

There is no excuse for holding back a student with good grades. No excuse at all, certainly not that the child wouldn't take your precious test, your crappy test that wouldn't tell you a thing that you can't already better find out from sources you already have. This is deeply and terribly wrong, and I hope the administrations and school boards of the offending counties find themselves buried in a mountain of angry letters, emails and phone calls, as well as a shit storm of deservedly negative publicity. Then I hope they go sit in the corner and think about what they've done and consider whether or not they have a future in education. 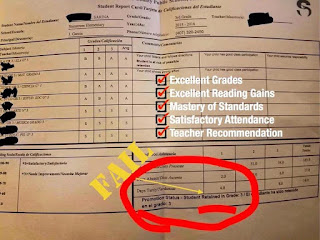 Seriously-- this is what we're talking about. I'm including this visual because it's hard to believe.

The state has issued a statement, sort of, on the matter. Update is here--
Posted by Peter Greene at Saturday, May 28, 2016
Email ThisBlogThis!Share to TwitterShare to FacebookShare to Pinterest