Forbes likes listicles with a business bent, but sometimes they seem applicable to other areas. School areas. For instance, here's their piece "Ten Things Only Bad Bosses Say." Let's see what portion of this resonates. Do we hear any of these from our on bad bosses-- and note that these are absolutely Forbes ten markers for bad bosses. That I did not make up. 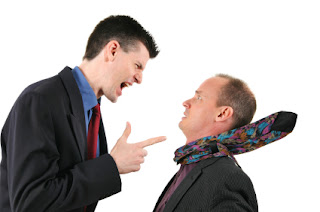 1. I don’t make the rules — I just enforce them

In all fairness to our superintendents and principals, this is true. They are just loaded with state and federal rules that control their lives and over which they have no control. But if you think about the many reform ideas we've been subjected to over the years, you'll notice that hardly anybody actually owns the ideas they push. Even Bill Gates didn't just say, "Y'all should adopt Common Core because it's a cool thing I found out about that I think you should do." Charteristas don 't just say, "We want these business opportunities to be available to us because we want to make money on this biz."

No, idea after idea is presented with a general stance of "research and studies show that this reform idea has to be implemented." Which is just one other way to say, "Look, I didn't make this stuff up. I'm just telling you what the research demands."

2. If you don’t want the job, I’ll find somebody who does

We've heard the message consistently for at least twenty-five years now-- teachers are easily replaceable. Any warm body will do for delivering instructional content from the box. Anybody with a college degree (or even less) can be put in a classroom. You would think the free market's invisible hand would step and across legislatures and school districts would be saying, "Teachers are special and increasingly rare butterflies-- we had better start offering more money and bennies to attract them." No, among many education policy leaders, the response to the growing teacher shortage has been simple-- "No biggy. We can find pretty much anyone to fill those jobs."

Here's a policy. Make it happen somehow. You can't have any money to make it happen. But we will punish either you or your students or your school or all together

The Forbesian bad boss doesn't want to make allowances for personal appointments, family stuff, etc. I was going to ay this doesn't apply so much to education, but then I thought of the charter teachers who are expected to work 120 hours per week.

5. If I wanted your opinion I’d ask for it

Oh, lordy yes. The whole steady hammering of the modern reform movement has been performed while resolutely ignoring the professional opinions of millions of teachers. In fact, we've actually improved by raising the reform opinion of teacher input to "benign neglect" from the previous "open hostility." A few years ago the common attitude toward teachers was, "You have screwed up the whole system and everything you think and say is clearly dead wrong." At some point reformsters realized that it's hard to implement much of any reform without the cooperation of classroom teachers, so they stopped being so openly hostile. But they still haven't haven't started listening to us.

See #2. Add the ongoing hunt for the legendary Bad Teachers. We are going to By God track them down and get rid of them, and if we haven't come up with an evaluation system that proves your a bad teacher yet, we're still working on it. Which is okay because (#2) you are easily replaced.

7. I don’t want to hear about problems — not unless you’ve got a solution

One of the rhetorical features of some reform arguments has been a shifting of the burden of proof, resulting in a conversation like this.

Reformer: It looks like you're having trouble breathing. Let me chop of your arms with a chainsaw.
Teachers: Are you nuts?! Put that chainsaw away.
Reformer: All right then-- you'd better come with an idea about what to do instead.

8. We’ve always done it this way

Yeah, we've all heard this one, and no, it's not usually the fault of reformsters. On the other hand, now that pushing charters and test-centered accountability and even the shambling remnants of the Common Core are the status quo, many reformers have become far more conservative.

9. You can be replaced in a heartbeat

It's possible that Forbes' list is a little redundant on this point. Of course, not only do many charter operators believe this one, but they actually plan based on it. Teachers can be replaced quickly and easily (just contact Teach for America for the next cohort) and they need to be, because the business model calls for a staff that churns regularly, thereby keeping costs and feistiness down.

If you're of a certain age, you may recall a time when thought leaders who wanted to sell their edu-idea would try to sell it to people who worked in education. The modern wave of reform, starting most notably with Common Core, reformers have simply bypassed the entire public ed system and used the weight of government, billionaires, regulations, and bureaucracy to impose their will on the system, augmented by well-financed PR for messaging and branding. The basic approach of modern reform has been to become either the boss, or the boss's best friend and adviser. Reform has been a top-down affair both with the "top" of state and federal government (Arne Duncan, Jeb Bush) as well as the "top" of big money and power (Bill Gates, Eli Broad), with the two slowly converging (Betsy DeVos). But modern reform has never been about collaborating with the public education system or the people who work there-- just getting people into a position to make it go where reformers ant it to go.

The intro of the Forbes article ends like this:

Here are ten things only bad managers say. If you hear these things said at your workplace, it’s time to take action and get your job search moving!

But of course for teachers, a different job within the same system will not necessarily help. We can identify our bad bosses; the real question is what do we do about them?