The Teachers I Appreciate

It's Teacher Appreciation Week, and like every single adult human in the country, my story includes teachers who made a huge difference in my life.

I don't even know the name of my kindergarten teacher at Maple Avenue School in Claremont, New Hampshire (yes, I think that's it in the picture. God bless the internet)-- but she was the person who pointed out to my parents that my not-so-great Letter Identification skills might be directly related to my not-so-great Seeing Things With My Eyeballs skills. So I owe her for that.

Miss Gause, my elementary music teacher, sternly hunted down the boys sitting in the back of the room not even trying and made us match pitch. That was a small thing, but it got me ready for the music aptitude test which in turn qualified me to take an instrument which has been hugely influential in my life. She made a small choice and it made a huge difference.

Mrs. Fulmer and Miss Eakin let me bring elementary education to grinding halt periodically as I read to my classmates my latest works of fiction. I still have most of them. I have read them, and I can assure you that they were completely void of any signs of Future Promise. But my peers liked them well enough, and my teachers' patience introduced me to the world of Making Things Can Be Cool.

In eighth grade, Mrs. O'Keefe showed me that not only could English class be cool and fun, but because the mission was to get better at reading, writing, listening and speaking, the possibilities for things you could study and projects you could do was virtually endless.

I found Mr. Bianchi's class painfully boring-- but at the same time, I was in awe of his supernatural levels of patience. If he had to go over something for an entire period in order for a student to get it, then he would go over it for an entire period, without ever making that student feel dumb. Years later, it was Tony's retirement that got me my first permanent gig in the high school. He also gave me my first copy of Confederacy of Dunces.

Mr. Lore taught biology, a class I was sure would never be of any use to me (I had already discerned that science was not my gift), but the class was rigorous and challenging and introduced me to a whole new level of intellectual exactitude. I never took a single college course in biology, and this high school class was still some of the best college preparation I ever had.

Mr. Eichholtz showed me how electrifying it could be to have a teacher whose whole passion and excitement was invested in what he taught. Everything in his class was interesting because he thought it was interesting-- in fact, while he was teaching it, at that moment, it was the most interesting thing on earth.

When I headed off to college, I met more teachers who helped chart my course. Dr. Zolbrod gave the best meetings ever-- the man could go over my less-than-stellar paper with me and leave me feeling like a writing champion. He was also a master of seeing what a student needed, and steering them toward that very thing; he showed me how to let students find their own way in their own time to their own place-- even guys like me who were far from star pupils.

Probably no teacher influenced me as much as Mr. Frye. He started me out on trombone lessons when I was in fifth grade, and he was my band director for the next eight years. I did not appreciate at the time how gifted he was in his ability to just step back and let students step up, rather than insist on Harry Dinkle levels of total control. In his band (which was never his band-- it was always our band) we learned about leadership and ownership and working with other people as a team. Plenty of people came out of his program to become professional musicians and music teachers, but he also produced an amazing number of people who did something else entirely-- but always kept music somewhere in their lives. I went to college and met people who had played in high school and never wanted to touch an instrument again, and I was flabbergasted. Music has been at the core of who I am my whole life; if I had had a different band director, I would literally have grown up to be somebody else, somebody completely different from the person I am today.

I never felt that any of the teachers who really affected me were trying to mold me or shape me or turn me into something in particular. I expect that like any other small human I would have actively resisted any such attempts. In fact, on reflection, I suppose that I encountered teachers who did try to mold me, and I did resist, and as I sit here today, I don't even remember them.

No, the most influential teachers I had inspired me, and the very most influential ones saw me, and in seeing me and who I was and who I could become, helped me see that myself. I've never seen teaching as metalwork, where you take a slab of iron and use heat and hammer and brute power to force it into the shape you choose for it. It's gardening. You can't ignore or neglect what's growing there, but you can't force it into a certain shape at a certain time. 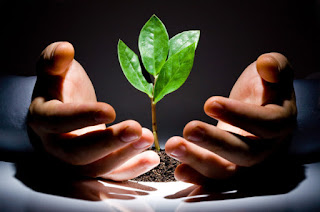 Those are the teachers I appreciate. Those are just some of the teachers who were an influence on me, and help me remember what teaching is supposed to look like. This, I think, is how I'll try to spend Teacher Appreciation week from now on-- not wondering if I'll be appreciated, but reflect on which people this teacher appreciates. Exercising gratitude is always a good exercise, as is renewing focus the mission. Have a good rest of the week.
Posted by Peter Greene at Wednesday, May 04, 2016