Chicago principal Troy LaRaviere has been relieved of his job as principal of Blaine Elementary because he won't shut up and stay in place. 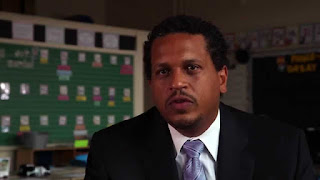 It's alarming because it is wrong in the specific, narrow focus. LaRaviere has repeatedly won the mayor's award for excellence and achievement. He has been a strong, articulate role model for his students and a leader for his community and school. His removal is a political power play, and it is not only an attack on the man's professional career, but an attack on the students and community that he has served.

This is a man who has repeatedly been shown to be at the top of his profession, and he has been sidelined for literally no good reason. CPS has refused to tell LaRaviere exactly what he's done wrong; they should do so now, today.

But beyond the specific injustice of LaRiviere's removal, there is the larger demonstration of one reason that the CEO model of school leadership is fatally flawed.

Reformsters love the CEO model, the idea that putting one high-powered visionary in charge of a system will Fix Everything. Across the country we've seen pushes for a CEO-driven system like the Achievement School District of Tennessee. Reformsters have expressed their love for mayoral control, so that just one person is in charge. Just what Chicago has and, some reformsters would say, just what Chicago needs. None of that messy board of elected directors stuff. In a perfect world, just put a hard-driving visionary in charge, give him some tools, remove obstructions like regulations and union contracts, and let him do his thing.

Except that this model does not pursue excellence in education. As LaRaviere's booting demonstrates, the hero CEO model most values loyalty and compliance.

All workers in the district, all teachers and administrators, lunch ladies and bus drivers-- every last one must be unswervingly loyal to the CEO and his vision.

And so LaRaviere, who has proven his excellence even on the mayor's own terms, must go because he won't be properly obedient and loyal to the CEO (and worse yet, might be acquiring the political heft to challenge Emanuel).

When you put a hero CEO in charge of a school system, you make politics and power-- not educational excellence-- the central focus of management. In fact, anyone who tries to stand up for educational excellence becomes a problem, a liability, a guy who has to be removed from his job because he won't properly kiss the boss's ring.

LaRaviere's benching is not merely an injustice and a wrong that should be righted immediately (if there is any justice and backbone in Chicago, he'll be elected head of the principals association anyway). It is a vivid and clear demonstration of why the Hero CEO model of school management should be rejected. The removal or elevation of employees based on loyalty rather than educational excellence is bad for the system, bad for schools, bad for students, and bad for the community (it's also proof, once again, of why tenure is necessary).

Speaking out about corruption in a system should be welcomed as an important part of keeping the system on track, whole and aimed at its best goals. Leaders within the system should not be slammed with mysterious charges, condemned for daring to challenge the Boss. This is no way to treat a great principal, and it's no way to run a school district.
Posted by Peter Greene at Sunday, April 24, 2016