The lawsuit has been filed against the managers of the long-troubled Kinston Charter Academy. In August of 2013, Kinston collected $666,000 from the state. That sum was based on a projected enrollment of 366 students, and was supposed to keep the school flush through October. The school only had 189 students (K-8). And it closed its doors for good at the beginning of September, leaving the state out two-thirds of a million dollars AND having to fund the education for those students-- again. 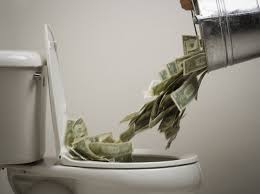 The failure was spectacular enough that it was the subject of a state audit in 2015. That audit turned up a variety of problems, though many had been long known. The charter opened up in 2004 and was immediately in financial trouble, almost closing up shop in 2007. CEO and principal Ozie Hall and his wife/dean of students/chairman of the board of directors Demyra McDonald-Hall were also found to be hiring unqualified relatives for various posts.

By the spring of 2013, the school had stopped paying some of its staff's benefits and retirement, but Hall told the state that the school would soon be refinancing its mortgage and that would make it flush again. Apparently, not so much. Some payroll obligations weren't met in the fall upon opening, and on Friday, September 6, the school closed its doors for good, leaving many parents stuck.

While that may have surprised the parents, it was not such a surprise to the state. Kinston had been on the "citations for financial deficiencies" list every year starting in 2008. If the state knew that the school was a financial mess, why did it keep giving Kinston money? WFAE education reporter Lisa Miller had the short answer for that:

The bottom line is they didn’t have a choice.  As long as the school is open, the state has to give them that money.

Hall attempted to fight back, and you can find a series of videos on Youtube in which he alleges that the Self Help Credit Union is part of a criminal conspiracy to take the school building, and the state held up money that the charter was entitled to. He has many theories, though none seem to explain how he came to claim twice as many students (and therefor twice as much money) as he actually had. He has also responded to the lawsuit:

“The allegations in the complaint filed by the Attorney General and Gubernatorial candidate Cooper are frivolous, motivated by political ambition, and made in retaliation for my civil rights work in making complaints of discrimination against the state,” Hall wrote. “The lawsuit will be defended vigorously.”

Hall has been a busy man. This link finds him as Reverend Ozie/Ozzie Hall, Jr., President of the Pitt County Coalition for Educating Black Children. His facebook page shows him graduating from De La Warr High School in 1976, and traveling to Japan as a member of the U.S. Delegation for the U.S.-Japan Police Community. He marks his graduation from Central Michigan University in 2003, and the getting his graduate degree from CMU in education in 2010, then started at Mount Olive College for Business Administration in 2011.

But Kinston is not Hall's first venture. Back in 1987, the New York Times was profiling Hall as a founder of the Juvenile Awareness Education Program, a program aimed at getting young people off the path to jail. Hall landed a $480,000 grant from the Department of Labor and Health, in part inspired by his own story-- first arrested at age 13, he went to prison in 1977 for armed robbery. In prison he studied, became "something of a jailhouse lawyer," and upon release in 1980, joined a community action agency in Wilmington, Delaware, leading to his founding of the JAEP in 1982. That program was given some modest credit for helping keep the streets of Wilmington a little less violent. In 2010, he was a commencement speaker for a NC Department of Corrections Commencement ceremony.

Nor has the fate of Kinston slowed him down-- Hall was almost immediately connected to another charter operation.

All along the way, Hall has been vocal in his criticism of racism, and was considered, at least by folks on the other side of the table, an advocate for reparations.

So what the heck is going on here. Is Hall a con artist who thought a charter school scam would be a good way to score some money? Is he a black activist whose attempt to do good work was ultimately brought down by a racist government that could pull some strings just to kill his school and take the building? Or is he a guy who meant well but was such a financial and educational amateur that he simply was in too far over his head to ever succeed?

His reported nepotism and bad math certainly suggest an answer to those questions, but given what I can find on line, I don't really know, and neither do you, and most especially neither does the state of North Carolina, whose charter oversight is so sloppy, loose and largely useless that they can't really tell the difference between a crooked charlatan, an unqualified incompetent, and a helpless victim of other peoples' malfeasance.

The only positive outcome of this mess is that a democrat and a republican in North Carolina were able to agree that their charter oversight rules are crappy and useless and therefor a menace to taxpayer dollars. When your regulations can't tell you anything except that something is wrong (and has been wrong for five years) and that you have no power to either stop it or explain it, then your regulations are beyond bad. A charter system this sloppy and just plain bad serves nobody-- not even the people who like charters.