Anti-Critical Race Theory warriors are coming for schools, and for the teachers in them.

In New York City, the group Free To Learn is spending millions of dollars on ad buys to target NYC schools (including some private ones) who are accused of indoctrinating children. The group says it supports the basic principle that students should be free to ask questions, develop individual thoughts and opinions, and think critically--but not about that race stuff, apparently. It's not obvious whose deep pockets are involved in funding this group, but it's led by Alleigh Marre, who's been in politics for a while, working on campaigns for Scott Walker and Scott Brown, as well as serving on Donald Trump's transition team.

But Free To Learn is just targeting schools. Others are targeting individual teachers. I do believe there are people with reasonable, reasoned concerns about CRT and its influence on education, but they're a small group, and their voices have been pretty much drowned out by the mob (and the GOP politicians trying hard to draw power from it). 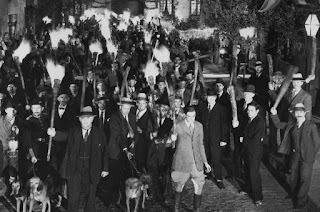 Amy Donofrio found herself re-assigned and then held up as a target by Florida's education commissioner. Misty Cromptom found she was being used as a campaign talking point in New Hampshire. On Twitter, a teacher reported to me that in her area, the No Left Turn group had taken screen shots of posts by teachers and administrators and used them in a presentation of evidence of indoctrination, with names highlighted and schools listed.

No Left Turn is another one of these culture warrior groups, this one spearheaded by Dr. Elana Yaron Fishbein, who pulled her children from school in Gladwyne PA because of a Cultural Proficiency Committee formed in the wake of the murder (she says "death") of George Floyd. They set up lessons that were unlike "the wholesome teaching of MLK, Jr. The group wants to "revive" education's fundamental discipline of "critical and active thinking which is based on facts, investigation, logic and sound reasoning," but they also include on their list of objectives, "Restore American patriotism in the classroom, including presenting our nations as consistently forward-thinking in its elevation of individual liberty and democratizing traditional Liberalism."

The Central Virginia chapter, the one that went Twitter hunting, has a Facebook page headed by an MLK Jr. quote. Facebook is apparently a nexus for many of these groups, and while this may seem like it's coming together quickly, many of the connections were already in place. The woman leading the Virginia No Left Turn crusade against CRT was, just a short while ago, leading the charge against masking and school closures.

Fox stories about these Courageous Moms often highlight a baseless fear of personal risk for standing up, but it's teachers who are being targeted. The Daily Wire just ran a piece about the Zinn Project pledge to Teach the Truth, now up to 4600 signers. Someone at Daily Wire took the time to sort through all the signatures and sort them by state and city, so that culture warriors can look up and hunt down any local teachers that are an indoctrination threat (I will not link to the DW piece, but here's the Zinn pledge). And yes, those signatures are public, but making it easy to target your local indoctrinatin' teacher just goes a scary extra mile.

And of course no movement to stamp out Plus Double Bad Wrongthink would be complete without a chance to turn in some naughty teacher or school. Free To Learn offers such an opportunity. Likewise Parents Defending Education (who run an Indoctrination Map), and even the Lt. Governor of Idaho (with her Education Indoctrination Task Force).

It's getting ugly, and it's getting ugly quickly, and schools and teachers may be wary that we're very close to the pitchforks and torches stage. The fact that many of these groups are ill-informed and spectacularly hypocritical ("They want to make this like Communist China," say the activists trying to implement a Cultural Revolution style purge of people with Bad Thoughts) is not going to matter a whit. Nor is "we don't teach CRT" a defense, because just about anything, from "equity" to "social emotional learning" is a sign you're Up To Something. It remains to be seen how many schools are going to be razed over this. Maybe , just maybe, these mobs are going to turn out to be reasonable people who just want to talk and who understand that serious, responsible people can have many views of CRT, and who understand that teachers want what's best for their students. I really don't like to be an alarmist. But right now it's not looking good.

Posted by Peter Greene at Saturday, June 26, 2021
Email ThisBlogThis!Share to TwitterShare to FacebookShare to Pinterest