FL: More Education Bigly Bad News (There Is No Bottom)

Florida continues to demonstrate that there is no bottom, absolutely no depth at which the legislature and their governor will say, "No way--that's just going too far." Having created a gag rule for shutting teachers up about All That Race Stuff, Current Governor and Future Heir To the Trump Presidential Crown Ron DeSantis just signed three more bills to clamp down on education and any nefarious indoctrinators lurking therein. And including a few features that haven't made the headlines.

SB 1108 has been getting attention mostly for its increased requirements for civics education and civics education testing. Students now must take a civics literacy course in high school. But that's not all that's in there. 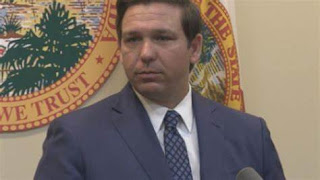 The bill also gives the state education department the authority "to hold patents, copyrights, trademarks and service marks" and use or sell them for "monetary gain or other consideration."

And the bill creates an Innovative Blended Learning and Real Time Student Assessment Pilot Program. The purpose of the program is "to develop and measure innovative blended learning and real-time weekly student assessment educational models," or what is sometimes called hybrid, with teachers and some students in a classroom, while other students are remote in the same class at the same time. But it also, in this bill, means "students learn in part through online delivery of content and instruction with some element of student control over time, place, path, or pace and in part at a traditional supervised classroom location away from home. So both synchronous and asynchronous instruction of both live and cyber students. But the "distance learning" must always be at the parents choosing with no coercion. And it's supposed to close the achievement gap. And the student can choose to switch modalities on any given day without notice.

So some sort of freakish Frankenstein's monster of cyber-schooling. Charters or public schools may choose to get a piece of this action.

HB 5 is the bill focusing on K-12 civics education, with the intent to make it more nationalistic. Civics ed must now include a "comparative discussion of political ideologies, such as communism and totalitarianism, that conflict with the principles of freedom and democracy essential to the founding principles of the United States."

This mandated indoctrination into the love of freedom must also include "patriotic programs" that will inculcate in students "an understanding of their shared rights and responsibilities, and of the founding principles" of the country. Also, a "sense of civic pride and desire to participate regularly with" local, state and federal government. Can't wait to see how they assess that one on the test.

But wait--there's more students are supposed to get. Also, an understanding of effective advocating before government. Also, an understanding of  civic-minded expectations of "an upright and desirable citizenry that recognizes and accepts responsibility for preserving and defending the blessings of liberty inherited from prior generations" and secured by the Constitution. And the program should also "curate" oral histories of "portraits in patriotism" including "first-person accounts of victims of other nations' governing philosophies who can compare those philosophies with" ours here in the US. So students are to learn that other countries are awful and we are awesome.

HB 233 is the one grabbing all the headlines, because it is represents a striking new low in crazy-pants authoritarian dystopic state law.

Extra crazy points for this part--the bill says that institutions of higher learning must not "limit students', faculty members', or staff members' access to, or observation of, ideas and opinions that they may find uncomfortable, unwelcome, disagreeable, or offensive." This is coming from the same state that just banned Critical Race Theory and anything else that might cause "discomfort, guilt, anguish, or any other psychological distress" to white students. This bills limits on shutting down anything unwelcome or offensive means that basically anything is fair game on a Florida campus.

But the headline crazy is the requirement for an annual  assessment of the "intellectual freedom and viewpoint diversity" of every institution of higher ed. Annual. There's no indication that survey responses have to be anonymous, so there's a concern about being targeted by the state. And DeSantis has indicated that he'd just as soon cut funds for any schools that turn out to be overly liberal. Reporters pressed DeSantis for some examples of this terrible scourge of intellectual repression of conservatives; he had nothing, but said he knows "a lot of parents" who worry about their children being indoctrinated on campus (presumably he meant "indoctrinated the wrong way").

The bill has been sailing along for a while, and this piece from the Miami Herald back in April gives a full picture of the intent here--particularly in a section of conversation with lobbyist Barney Bishop, who pushed hard for this bill:

Bishop won’t name his clients other than to say he is lobbying the bill on behalf of Citizens for Responsible Spending, a “grassroots organization committed to ethics, the budget and good jobs.” He is the only lobbyist representing non-education groups that is pushing for the bill.

When asked why, he painted a dark, repressive picture.

“I think that those of us who have diverse thinking and look at both sides of the issue, see that the way the cards are stacked in the education system, is toward the left and toward the liberal ideology and also secularism — and those were not the values that our country was founded on,” Bishop said. “And those are the values that we need to get our country back to.”

Bishop said he “certainly hope[s]” the effort will go further — into the K-12 system.
So, we need to be looking at both sides, but really only the correct side, the Jesus side. Because indoctrination is totally okay when you're doing it for God.
There is no bottom.
Posted by Peter Greene at Thursday, June 24, 2021
Email ThisBlogThis!Share to TwitterShare to FacebookShare to Pinterest