Booker Returns To The Corporate Fold

On Monday of this week, Cory Booker went full charter school in an op-ed for the New York Times, a choice that made a little more sense when I looked at my Wednesday e-mail from Whitney Tilson.

Whitney Tilson is a successful hedge funder who started Democrats for Education Reform mostly because at that point, Republicans for Education Reform would have been unnecessary. The GOP was already behind the idea of privatization; it was the Dems who needed a push in that direction. In some states, actual Democrats have repudiated the D in DFER, and since Betsy DeVos became the public face of so many of their favorite policies, they've been struggling for Democrat leverage. Look for them and their friends every time you hear of a poll that shows how much Real Democrats love charter schools. 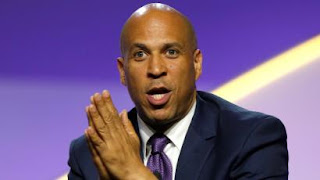 Cory Booker was a hot young star and a friend of DFER, so things were looking good. But then suddenly the 2020 election actually involved more education discussion than just thirty seconds about universal pre-K, and Booker's close ties to charters and, yes, Betsy DeVos, were looking like an obstacle.

Apparently, Booker has decided to just lean into charter support. Monday's op-ed was a compendium of the usual pro-charter baloney. Students are trapped in zip codes with bad schools; this is not baloney, but the idea that we should let some privatized amateurs rescue a few of those children instead of investing resources in the improvement of the public schools-- well that is baloney. The back seat of my car is filled with fast food boxes and twinkie wrappers-- clearly the only solution is to buy a second car.

And Booker tries to dance along the thin line that has been frustrating reformsters for the last three years:

For-profit charter school schemes and the anti-public education agenda of President Trump and Education Secretary Betsy DeVos are hurting teachers, students and their families. Of course, we must fight back against these misguided and harmful forces. But we shouldn’t let the worst actors distort this crucial debate, as they have in recent years.

Dude. You worked side by side with DeVos, cheering a multitude of for-profit schemes (and please don't insult our intelligence by trying the old "for-profit charters are evil but non-profits are fine" dodge. There are plenty of ways to profit from non-profit charters, and you have seen most of them). Hillary tried this stuff. Mayor Pete is trying it right now.

Booker is going to assert that "high-performing charter schools" are some kind of entirely different beast, and he's going to try to attach "public" to them. They aren't. He's going to try to paint the privatization and charter mess in Newark as a success, which is a generous read. Then there's this gem:

As Democrats, we can’t continue to fall into the trap of dismissing good ideas because they don’t fit into neat ideological boxes or don’t personally affect some of the louder, more privileged voices in the party.

Can we fall into the trap of dismissing bad ideas because they are bad? Because I don't have a problem with unaccountable, privately owned and operated, non-transparent, selectively creaming, public school draining, redundant, segregationalist, profiteering charter schools because they ofend some ideological box of mine.

And about those "louder, more privileged voices" in the party-- well, that brings me back to Tilson's Wednesday e-mail, in which he stumps for Booker.

Turns out that Booker had a couple of meetings with Tilson last week, and now Tilson is convinced that Booker is "viable." He'll beat Trump "handily." He published the "courageous" op-ed that I'm assuming was Exhibit A in Booker's "You Rich Guys Can Trust Me" pitch. Also, they're longtime friends, and Booker helped Tilson's daughter with a class project.

It appears that Booker has decided to join Mayor Pete and Bloomberg and that other guy whose name I've already forgotten in trying to tap the Rich Guys Who Are Scared To Death of Warren and Sanders wing of the party. And why not-- Booker might as well run as himself and not court whiplash by trying to veer leftward. A later paragraph in his op-ed suggests he might be trying to stake out a place in the Make Everybody Happy Lane:

As a party, we need to take a holistic approach to improving outcomes for children who are underserved and historically disadvantaged. That must mean significantly increasing funding for public schools, raising teacher pay, fully funding the Individuals With Disabilities Education Act, investing in universal preschool, eliminating child poverty — and yes, supporting high-performing public charter schools if and when they are the right fit for a community, are equitable and inclusive, and play by the same rules as other public schools.

"Equitable and inclusive and play by the same rules as other public [sic] schools" is a mighty tall order, one that charters have pretty consistently kicked back against. After all, they will say, the whole point of being a charter school is to not have to play by those rules. The funny thin here is that if Booker actually meant that-- if he actually meant that charters must be owned by the taxpayers, and operated by taxpayer-elected boards, and must raise the tax money needed to operate, and operate with complete operational and financial transparency ,and students teachers and staff all have all their rights and protections, and all students must be accepted even if that means the additional expense of providing necessary programs for special needs, and teachers must be fully certified and free to unionize, and must be operated by fully qualified trained educators, and cannot be used in any kind of profit-making shell game-- if he actually meant all that, then he wouldn't be quite so far removed from Warren and Sanders. But then, if he actually meant all that, I don't think Whitney Tilson would be writing him a glowing letter of recommendation.

No, it appears that Booker remains a good friend of corporate ed reform, the kind of guy who, had he been elected in 2016 ,would have been perfectly happy to install Betsy DeVos or Eva Moskowitz or Michelle Rhee as Secretary of Education and pursue the same failed policies that we suffered under in the Bush-Obama years. I'm already on record-- my expectations are low and I will vote for Cory Booker-- hell, I'll vote for Cory Booker's dog-- should he win the nomination. But until that day comes, public education voters should steer clear
Posted by Peter Greene at Friday, November 22, 2019
Email ThisBlogThis!Share to TwitterShare to FacebookShare to Pinterest