President Grant and the Reconstruction That Wasn't

I've finished the biography Grant by Ron Chernow, the author who famously wrote that bio of Alexander Hamilton (and a really good one of Rockefeller, too). In the end, Ulysses S. Grant remains a little more opaque than some of Chernow's other subjects, but the history that Grant himself lived through is a striking reflection of our nation in a troubled time. He failed at business. His in-laws were a slave-owning Southern family. He won the Civil War, and then he presided over Reconstruction, a period that is both hugely important and hugely ignored by US citizens. We are still paying the price for that ignorance. 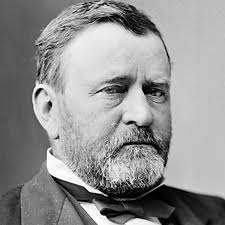 There are better and deeper studies of Reconstruction than the handful of chapters that it gets in this book, but the context underlines just how quickly things fell apart and how little time and space Grant had to come up with a federal response.

The challenges started with the moment of Confederate surrender; Grant earned the loyalty of many Southern military leaders by allowing officers to keep firearms at surrender. It gave Grant unique leverage in dealing with the returning states.

The problems of Reconstruction were both simple and, perhaps, unsolvable. How to bring the Southern states back into the country they had rebelled against; under what terms to you welcome traitors back to the fold? At the same time, how to bring former slaves into the nation as full citizens. These had been faced by Johnson, whose solution so clashed with that of Republican Congress that he was impeached.

But the bigger problem was left to Grant. You can abolish the institution of slavery, but how do you get rid of the mindset that made it possible. In a land dedicated to the prospect that all people are created equal, you get a lot of cognitive dissonance by upholding laws that allow people to be bought and sold and owned, and the American solution to that cognitive dissonance was to believe that African-Americans were not people.

The end of slavery did not mean the end of that belief.

In 1867 the Bureau of Education was created to educate freed people; Congress kept gutting its budget.

Under Grant, the vote was extended to freed men. That move enraged and enflamed Southerners. The Klan and other such groups sprang up, intent on reversing Reconstruction. Sometimes history talks about "intimidation" of Black voters, but I'm not sure that word really captures a period in which African-Americans were dragged from their homes in the dead of night and beaten, tortured, killed. Black Republicans were elected in the deep south and that just spurred greater reaction. The specific examples are too numerous, and all horrifying. In Meridian, Mississippi, in 1871, three Black citizens were arrested on charges of delivering incendiary speeches; in court, the Republican judge and two of the accused were killed, kicking off riots in which thirty Blacks were gunned down, "including all the leading colored men of the town with one or two exceptions." Black militiamen were arrested on trumped up charges of murder, then dragged out of ail and lynched. When we read today about countries were judges and elected officials are murdered for daring to hold office and do their jobs-- that the US South during Reconstruction.

The level of domestic terrorism unleashed by the Klan during Reconstruction is almost inconceivable. Congress brought up various acts to combat it, but Southern white representatives saw these as just a way to deny them power in their own states. By 1872, Grant had largely suppressed and broken them, and yet within a year, there was more of the same. In April of 1873, Black politicians won leading positions in Grant Parish. A mob of several hundred whites stormed the courthouse, burned it, and slaughtered the men inside. Grant sent in federal forces; 72 men were indicted, and three were convicted.

This is repeatedly the story of Reconstruction. The North won the war and lost the peace. Federal troops were sent to the South to protect freed people, but Grant was reluctant to completely obliterate the states' right to govern themselves, and as long as the states governed themselves, they would make sure that such government remained firmly in white hands. They would undo the results of the war.

We can blame it all on the South, but Chernow makes it clear that one of the things holding Grant back was a lack of national will, a collective white sigh of "This stuff again? Are we still having this argument." Political fatigue is not simply a modern problem. And Northerners were not, on the whole, any better than Southerners when it came to recognizing the humanity and personhood of freed people.

The political solutions had failed. Blacks had been beaten back from taking any political power. And in 1876, politics failed again. The election was an unresolvable, corrupted mess, with the end result that the South was able to hold the Presidency hostage. "We'll let this election go," they said, "if you remove every last trace of federal support for Reconstruction." And so the troops went home, Northerners gave a sigh of relief that that was all over with, and Southerners worked at maintaining a new status quo that in many ways resembled the old pre-war status quo. Jim Crow took over.

Why rehash this? Because the version of history that many of us were brought up on, especially in the North, especially if we're white, was something different.

"There was slavery. Then there was a war," it says. "And the war ended slavery, and so at that point, Blacks and Whites were on an even playing field, and wherever they are now, 150 years later, is their own doing."

There was never a level playing field. Here and there, African-American citizens may have gotten the rights they were entitled to, sometimes with a huge fight, but that was the exception, not the rule. Read works like The Warmth of Other Suns, to get a sense of how long the reach of Reconstruction's failure has been. Works like Stony the Road give a picture of some of the ideas underneath it all, but I'm always struck by just practical things. In 150 years, White families have had generations to build ladders of money and property-- maybe not vast wealth, but enough to give your children something to stand on. Black families haven't had that chance, through the days of sharecropping up through the days of redlined neighborhoods where houses would never accrue any real value. And the housing issues have, of course, been turned directly into education issues.

What we forget is how very short Reconstruction was. If we count the Johnson years (and that would be generous), it was barely more than a decade. Less time than we have been in Afghanistan. Mostly it rested on the back of a single two-term President. Is it any wonder that we still have so much work to do.


Posted by Peter Greene at Saturday, November 23, 2019
Email ThisBlogThis!Share to TwitterShare to FacebookShare to Pinterest