Dominionism argues that the US should be a literal Christian nation, its government run by Christians. It comes in varying degrees of severity, with varying amounts of nationalism mixed in. One of the major proponents of American (i.e. US) dominionism was D. James Kennedy, a minister and broadcaster in Florida. Sample quote: To be a true Christian citizen means to "take dominion over all things as vice-regents of God." Or there's this one:

Our job is to reclaim America for Christ, whatever the cost. As the vice regents of God, we are to exercise godly dominion and influence over our neighborhoods, our schools, our government, our literature and arts, our sports arenas, our entertainment media, our news media, our scientific endeavors—in short, over every aspect and institution of human society.

Kennedy has done some whacky things, like teaming up with Roy Moore to turn the Ten Commandments into a cause celebre. He also created the D. James Kennedy Center for Christian Statesmanship, located in DC and dedicated to helping the Right Kind of Believers take their place in government. They offer leadership training with three weeks of intensive training that covers both the theology and the ins-and-outs of federal government.

As God’s special revelation to humanity, the Bible is the authoritative source on how we ought to live personally and in society. In a rapidly-changing world of moral ambiguity, a worldview based on the Bible orients us to the truth and shows the way to human flourishing. Men and women trained in this approach become wise, persuasive, desirable candidates for elected office.

The distinguished faculty includes folks from Moody Bible Institute, the Heritage Foundation, the Buckley School of Public Speaking, the American Center for Law and Justice, among others.

It's a view that represents what we think of as the culture wars, only on steroids. These are folks who see themselves as warriors for God, fighting to drive secularism and evil and wrong religions (like, you know, Islam) out of all aspects of US life. Or if you like a visual representation: 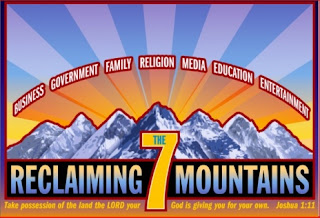 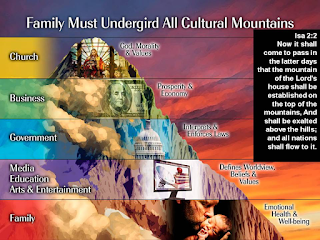 It should be said that plenty of folks within the Christian church are not fans of this stuff--but plenty of others are all too happy to see themselves as warriors for God, and many of those folks are in elected office right now. The Center stays in touch with many of these folks, holding Bible classes for Congress and support for those who are doing God's work of reclaiming the seven mountains. The Center also gives out an annual award-- the Distinguished Christian Statesman Award. You can see the kind of goals these folks support. Past recipients include Mike Pence, John Ashcroft, and Mike Huckabee. They just handed out the 2019 award.

The recipient was Betsy DeVos.

There's no big shock here. The DeVos family has always been, if not dominionists, certainly dominionist-adjacent. It's the kind of thinking that yields the oft-cited quote about advancing God's kingdom. I've talked to religious conservatives who talk about "taking back" schools for the church. They think DeVos is a great choice, that everyone should be pulling their chidren out of government schools.

There's nothing to learn about DeVos from her acceptance of this award from these folks, b ut it underlines what we've already seen-- DeVos does not believe in public education as created and maintained by a secular government. Schools (as with most of government) should be operated by people who Believe Correctly, using the divinely-ordained free market system that allows God's chosen to rise and the unworthy to fall. And now she has a fancy award for her mantle.