Elizabeth Warren was in Atlanta at Clark Atlanta University to talk to black voters, when the rally was disrupted by a group of charter school supporters, angry about the hard line stance Warren has staked out on the charter school industry.

The group of grass roots charter supporters had, they said, "come from all over the country," and if that doesn't send up a little red flag, then perhaps their perfectly matching t-shirts and signs might. 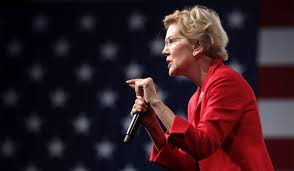 Intercept reporter Ryan Grim was there, and with some interviewing and online searches, he unraveled the whole thing pretty quickly in a series of tweets that are collected in this write-up.

The group said they raised money on GoFundMe, which turned out to be true-- however, the funding was stacked with  anonymous $1,000 donors.

The group included Memphis Lift Parent Institute, Sarah Carpenter is the founder and chief exec, but she didn't do it alone. The group was aided by Strategy Redefined, a Nashville education consulting firm, and Natasha Kamrani, head of Tennessee's chapter of Democrats for Education Reform and the wide of Chris Barbic, the original head of Tennessee's ill-fated Achievement School District. Grim says that the group is 100% funded by the Waltons; published reports say they've given Memphis Lift $1.5 million since 2015. Since their 2017 filing shows $375, 200, with $200 coming from public contributions, that 100% seems just about right. Here's a glowing profile of the group on the Walton Foundation site.

[Update: Per Matt Barnum* the group also include Howard Fuller and a few other activist groups funded by Walton and City Fund money.]

It's not unusual for the Waltons to find and fund black faces to put forward their charter agenda. And while Memphis Lift sometimes claims to be agnostic about public-vs-charter schools, that is one big batch of charter-loving folks backing up this grass roots group.

As Grim tweeted, "A group funded by some of the richest people in the world, the Waltons, just disrupted an @ewarren speech on the 1881 Atlanta washerwoman strike. Can't make this stuff up." It's not a new game; charter advocates have often loaded up parents and students, made them some t-shirts, and deployed them as citizen lobbyists.

There's a lot of money and power behind the charter school movement. Expect more of these shenanigans if Warren continues to lead the Democratic pack. The charter industry is not gong to let her go without a fight.

*Update: There's a good further account of the meeting and more details about the group that protested here by Matt Barnum in Chalkbeat
Posted by Peter Greene at Friday, November 22, 2019
Email ThisBlogThis!Share to TwitterShare to FacebookShare to Pinterest