The Ohio House of Representatives is ready to help students take a bold step forward into the post-fact world. Wednesday they passed (and when I say "they," I mean the solid vote-as-a-bloc GOP) HB 164.

It's called the "Ohio Student Religious Liberties Act of 2019" and it sets out to accomplish a few things:

It removes the limits on exercising expression of student religious beliefs. The old, struck-out language  said the board of education could limit said expression to lunch period or other noninstructional time. That's the piddly stuff. 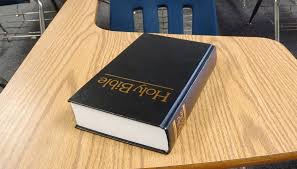 Under the new language, "religious expression" (the stuff no longer limited to non-instructional time) includes prayer, gatherings (clubs, prayer groups, etc), distribution of written materials, and, well, anything religious, actually, including wearing religious gear or "expression of a religious viewpoint" (as long as it's not obscene or indecent or vulgar). Cue the Church of the Flying Spagetti Monster and the local Satanic Temple; if a student offers a prayer to Satan in the middle of English class and some Christians in the class find that indecent and vulgar, can it be suppressed? Congratulations to the first batch of lawyers and judges that are going to have to sort this out. Double congratulations to whatever government body ends up being responsible for determining which religions are state-certified to be protected under this law.

Students hall have access to school facilities before, during and after school that school hours to the same extent that secular activities may do so. Place your bets now on how many schools will simply ban all before and after school activities in order to sidestep this.

And here's the one that's been drawing headlines (because it is the most spectacularly boneheaded part of this exercise). Let me quote the meat. No school officials shall

prohibit a student from engaging in religious expression in the completion of homework, artwork, or other written or oral assignments. Assignment grades and scores shall be calculated using ordinary academic standards of substance and relevance, including any legitimate pedagogical concerns, and shall not penalize or reward a student based on the religious content of a student's work.

The bill's sponsor, Timothy Ginter, insists that the bill does not say what it says.

“Under House Bill 164, a Christian or Jewish student would not be able to say my religious texts teach me that the world is 6,000 years old, so I don't have to answer this question. They're still going to be tested in the class and they cannot ignore the class material,” said Ginter.

Ginter has held a variety of jobs, including machinist and marketing guy for an IT company, but for thirty-nine years, he's been an ordained minister.

There are two problems with his insistence that the bill doesn't mean what it says. First, courts often interpret laws based on what they say and not what some legislator claims they meant to say. Second, if Ginter's reading of his own bill is correct, the bill is simply unnecessary.

Critics have already stated that the bill says what it says. The ACLU's chief Ohio lobbyist told Cleveland.com: “Under HB 164, the answer is ‘no,’ as this legislation clearly states the instructor 'shall not penalize or reward a student based on the religious content of a student’s work.”

Students brought in to testify about the need mentioned things like not being included in the school yearbook. As a former yearbook adviser, I'll answer that one-- yearbooks generally stick to activities actually sponsored by the school (I'm betting the yearbook also did not include the 4-H clubs that students belong to). The rights of religious freedom are well-protected; these days, it seems legislators are far more concerned about protecting religious privilege.

This reduces local control, extends the reach of religions into school, and would absolutely end up with a court case abut whether or not Chris can be given a lower score for refusing to answer questions about evolution. Worse, a whole lot of school administrators would greet the adoption of this law by scouring their curriculum to look for everything that could possibly end up in court and figure out ways to avoid it. Mark my words-- some principal or superintendent is going to respond by saying, "Let's just not teach evolution at all, just to stay safe." Congratulations to the science-loving family that drags him into court anyway for cutting out critical units.

The many possible consequences of this bill are a kaleidoscope of awful. It's not just the refusal to do science homework. If the student comes from a religion that believes women should be subservient, can he refuse to have a female teacher, or exercise his religion by ignoring, talking over, and generally harassing female classmates. Is a literature student allowed to go far outside the text to read it through their own lens and then demand an A?

But mostly, how do we run a school in which the religious answer on homework or a test is "correct," even when it isn't? Who keeps the running list of which religious beliefs are to be considered correct, or will students just be free to make them up as they go, like God-sponsored Calvinball. And who will be able to provide oversight for the believers who follow anything not-Christian? If I take my oral exam in tongues, will that do? And the rest of the bill is no small thing, either. Exactly how far can my exercise of my religion go during instructional time? Silent prayers? Loud prayers? Bursting into song? Berating my gay classmates?

This is a dumb law. Declaring the religion must supercede facts is dumb, bad news for both religion and facts. This is a dumb law. It's the kind of law folks pass when they've spent too much time thinking about how to score points back home with the Jesusians and too little time thinking about how the law will actually play out. Here's hoping the Ohio senate smashes it flat.