I've known Beth Pfohl for years. She was a top student in my Honors English class, and years before that I cast her as Annie in our community theater production. When she was a senior, I installed her as editor of the yearbook. She's an exceptional human being. Beth is currently finishing up her college education at Miami of Ohio, and it is from that vantage point that she wrote the following post for her own blog, which I am reprinting here with her permission.

I am heartbroken, and I am furious.

So you know what, I’m going to discuss the forbidden topic: money, and more specifically the absurd amount American students must pay for quality university educations. 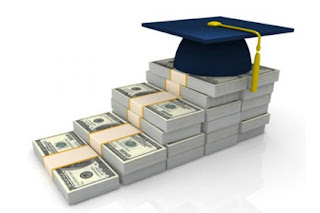 Because today my heart broke, not for myself, but for someone I love. Today, she had to say goodbye to her dream school, not because she wasn’t accepted. Not because the reality when visiting the school was a disappointment. Not because it was too far away from home. Not because she is lacking support from her family. Not because she hasn’t saved up enough money.

Because college is too damn expensive.

This open letter isn’t meant to be about me, but I think it would not leave as great an impact if I did not speak in specifics.

I am a senior, graduating in May from Miami University (Ohio). I absolutely love this school and wouldn’t trade my time here for anything. However, I live in Pennsylvania, so I pay out-of-state tuition. Yes, I chose Miami because I loved the school, but also because it was one of the more financially reasonable options available to me.

Cornell would have been $60,000 a year with limited financial aid available as I am not an athlete nor a genius.

Penn State would have been $30,000 a year with an honors scholarship.

Christopher Newport would have been $27,000 a year with a performance scholarship, albeit one that they were forcing me to decide upon prior to the May 1st decision deadline and prior to hearing back about offers from some other schools.

Miami costs my family and me (baseline) around $22,000 a year after the scholarships I was lucky enough to receive. Without these scholarships, I would have paid $44,000 yearly, and for new incoming students, the sticker price is closer to $50,000.

I graduated valedictorian of my high school. I currently hold a 3.96 GPA with a double major and a minor at Miami. I have had the honor of receiving two significant awards for service to my university. I also come from a middle-class family. I have worked through my time at school and over breaks. I took an average of 20 credit hours per semester so that I could take a semester off for a full-time internship in order to earn money to help reduce the costs associated with studying abroad.

Yet even with the all of the hard work (from both my family and myself) and all my scholarships, as of yesterday, I owe $19,762.49 to Granite State Management and Resources, and I consider myself much luckier than most. The average amount to owe after attending a four-year college is nearly $29,000.

The average. That means approximately 50 percent of people owe more than this amount.

Clearly this is not a Miami problem; it’s a systemic problem that stems from the out-of-state/in-state methodology. For the purpose of this open letter, let’s call in-state costs for state schools much more reasonable (This is despite my actual belief that this cost is also way too expensive. For example, Miami University costs $30,000 a year for in-state students.).

The philosophy behind the state system for higher education stems from taxes. Basically, you pay taxes in your home state which go toward funding public higher-education schools in that state, so when you decide to attend a university outside of your state, the cost goes up since you have not paid taxes to support the education system in that state.

Sure, an easy solution would be to say, “Only go to public schools in your home state,” but think of the talented individuals you are crippling with that idea.

Sometimes the best school that is the best fit for you just isn’t located where you happen to live.

That was the case with me.

Penn State would have been fine, but it was too impersonal for me and didn’t encourage study abroad to the same level I wanted.

Edinboro, Clarion and Slippery Rock would also have been fine, but I was hoping to go further away from home to broaden my horizons.

The other schools I looked at were either all private or out-of-state and therefore came with the associated hefty price tags.
So I chose a school that I loved, but also a school that wouldn’t see me paying off my loans well into my 50s.

Everyone deserves to be able to attend their dream school if they put in the work to get accepted, and even though this is not a Miami-only problem, I am calling Miami out. Let’s work together to come up with a better way.

Let’s work together to ensure that students who truly and completely embody the principles of love and honor don’t have to settle for the least-expensive option.

That $2,000 that will be left in my meal plan when I graduate that won’t be refunded: put it toward a scholarship. The $135 I pay every year to use the busses which I haven’t actually used since sophomore year: put it toward a scholarship. How about the stolen goods fee that every student pays regardless of whether or not they actually steal things? What about the $200 I pay for career development when I have utilized Career Center resources twice during my time at Miami? How about the scholarship money that Miami quits paying for the students who fail to meet academic standards?

This is no solution to the overwhelming problem facing this generation of college students, but at least it’s a start.

And just a reminder to all the nay-sayers out there; according to Forbes, from 1985 to 2011, average tuition costs increased 498 percent compared to the national inflation rate of 114 percent over the same time.

“Working your way through college” isn’t possible anymore. Trust me because I tried, and even then, I couldn’t get much beyond book costs.

To put it simply, there is no way to pay for my college education in its entirety, even if I were to hold a full-time, salaried job.

I am calling on the school that I love to make a change. Show the world what love and honor means and lead the push for finding a solution.

But I ask, how many leaders never made it here? How many did we turn away simply because they couldn’t pay?

That’s not what love and honor means to me.

P.S. And should anyone out there want to give a more-than-deserving, kindest-person-ever a chance to attend Miami of Ohio, I know just the person.
Posted by Peter Greene at Monday, April 22, 2019