Rep. Rebecca Roeber (R) of Lee's Summit, Missouri has proposed a bill to expand charter reach; the state has basically confined charter schools to the Kansas City and St. Louis districts. But response to the bill has not been exactly a slam dunk.

The bill would allow charters to open in communities of greater than 30,000 people or an accredited-without-provisions school district. The feelings about the bill are tight enough that both sides were feeling cautiously optimistic. 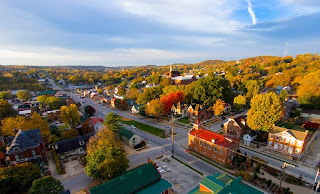 Roeber is a former public teacher (and seventeen years in the classroom, not some TFA two-year temp). Her voting record is-- well, she tried to expand charters in 2017, voted against the authority of local government to set minimum wage, voted to keep language that says marriage is only between a man and a woman (but voted against closing the loophole that allows a sexual predator to avoid criminal charges by marrying their teenaged victims), and voted for Right-to-Work in the state. She appears to be married to Barefoot Rick, a well-known barefoot runner and Christian speaker. Nine days ago she was left in serious condition after the car she was driving crossed the center line and hit another head on.

Roeber's position on charters has been pretty simple:

This idea about how education works is not reflected by reality, and lots of Missourians know it. Editorials have suggested that charters need to work better before any expansion is considered. In fact, an encouraging number of folks get exactly why charter expansion is a bad idea. The head of the Missouri School Boards Association notes that school districts are governed by elected school board members who live in the district and pay taxes there. Charter schools should operate under the same regulations, he said. “They receive public dollars, but they are not accountable to taxpayers like traditional schools." He's not alone:

“The state has to get it right,” he said.

Other legislators have tried to blunt some of the problems with the bill:

Sen. Lauren Arthur, D-Clay County, proposed an amendment Tuesday to allow voters at school board elections to “approve the operation of the charter school in the district.”

“We’re saying that a charter school opening in a school district will have an impact on that district, and if you’re someone that lives in that area ... I think there is a good reason for you to have some say on whether or not a charter school would open in your district,” Arthur said.

Another legislator tried to remove the open enrollment portion of the bill.

Then Tuesday of this week, the bill hit another roadblock-- an honest-to-goodness bipartisan filibuster. Sen. Doug Libla, R-Poplar Bluff, filibustered for over two hours Tuesday. He focused on the success rate of Missouri’s charter schools and the costs taxpayers would pay for failed charter schools. And he was joined by an assortment of legislators from both parties.

According to the Missouri Department of Education, only 67% of Missouri's charter schools have stayed open. For charter proponents this is, of course, a feature and not a bug-- the invisible hand of the market is supposed to be opening and shutting schools left and right, and that is supposed to be a good thing. Yet it leaves students hanging, sometimes mid-year, and it leaves taxpayers footing the bill for schools that don't even exist any more, like having to make payments on a car that your teenaged child wrapped around a tree and totaled.

Missouri's charters don't do a great job and cost taxpayers a bunch of money. Expansion under this bill would also involve stripping local voters and taxpayers of any voice in what happens with charters in their area.

At the moment the bill appears to still just sort of sitting there. It's a good reminder that education issues have ceased to be clearly GOP or Democratic-- the question is, do you support public education for all, or not? Missourians who care about public education and local control might want to call their elected representatives and voice an opinion here.