For Throwback Thursday, here's a piece that I ran in my local newspaper column almost a decade ago. It's still one of the most popular items I ever ran, and it even prompted some fans to create some art to go with it. It's not about education-- except that some of you will absolutely recognize the management problem described here.


One great workplace mystery: why do some people get punished for good work while people who do lousy work are rewarded for their slackness?

Ordinarily, it’s smart to make the most use of your best people. If Pat can build ten types of widgets quickly and Chris can only do two kinds at a moderate tempo, then the smart response to a new complicated rush widget order is to give it to Pat.

But in this scenario, Chris is less spectacular, but still competent. It’s when a weak manager and an incompetent worker enter the picture that the backwards rewards system kicks in.

One major rule of bad management is “Avoid problems.” Bad managers don’t know how to fix problems or deal with crises, so their management style is based on ignoring, waiting, hiding, or sweeping under carpets. 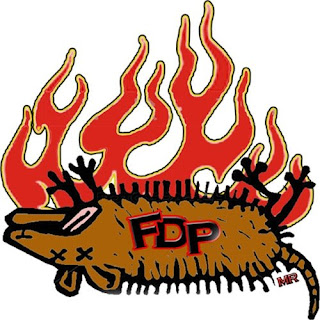 When Mr. Dimbulb [that could be Principal Dimbulb or Superintendent Dimbulb for education purposes] considers his workers, he’s not thinking “How do I get the best work out of this person?” He’s thinking, “How can I get this person to create the fewest problems for me?”

For Mr. Dimbulb, the best workers are the ones who solve their own problems, or at least won’t pass them back up to the front office. If Mr. Dimbulb needs to hand a flaming dead possum to someone, he’ll hand it to the person least likely to squirt it with kerosene and throw it back.

So the best, most responsible workers get the flaming dead possums.

Pat may get tired and frustrated. Pat may go home thinking, “Can’t Dimbulb see that I’m killing myself putting out these dead possums? Can’t he see I’m staying late and starting early and wearing myself out? Can’t he see there’s a problem?”

The answer is, no, he can’t, because those problems aren’t Mr. Dimbulb’s problems. All he knows, all he needs to know, is that there is no flaming dead possum on his desk. And as long as he can make them go away by handing them off to Pat, Pat will be the flaming dead possum specialist.

But for Mr. Dimbulb, Chris is a challenge. If Dimbulb hands Chris so much as a slightly stuporous hamster, he’ll get yelping from Chris, calls from the customer and Chris’s supervisor, and complaints from all quarters about Chris’s mishandling of the little dysfunctional rodent. Not only will he not get rid of the hamster, but Chris will manage to turn it into an angry water buffalo.

From Dimbulb’s standpoint, the best job to give Chris is an assignment along the lines of “Go sit in the shady corner and take a nap.”

So for doing good work, Pat gets dumped on, and for being incompetent, Chris gets a cushy job that demands little.

A better manager than Mr. Dimbulb would follow a simple two-step process.

Step Two: If Step One Fails, Fire Chris. [Do not tell me this can't be done to teachers. It absolutely can. It just requires administrators to do their damn jobs.]

A manager can skip step one in certain extreme cases (Chris is late every single day, Chris blows up workplace, Chris shoots colleagues). But generally the first smart move is to see if Chris can be salvaged or turned into something productive. It is, after all, a manager’s job to figure out how to get the best work out of his people.

Mr. Dimbulb will not choose this option. He is pretty sure it would be hard. At the very least it would require him to take on a problem, and this is where his fundamental weakness as a manager lies. You can only solve a problem if A) you acknowledge it exists and B) acknowledge that it’s your problem. And Dimbulb’s first priority is to make sure that he doesn’t have any problems.

And since none of the problems are his, he never solves any of them. He just keeps passing them on to the employees who, as far as he knows, make the problems go away. And he gets angry at the people who keep bringing him more problems.

Under this system, competent employees face a tough decision. They can keep enabling their incompetent boss, like the alcoholic’s wife who keeps telling the kids, “Daddy missed Christmas because the space aliens got him.”

Or they can step back and let the next flaming dead possum burn the place down, thereby running the risk of either getting themselves fired or letting the workplace self-destruct. Option #3 is to send articles like this one to Mr. Dimbulb, but this never helps, because the Dimbulbs of the world will never recognize themselves in this column.
Posted by Peter Greene at Thursday, March 01, 2018