You may have missed the fact that this is National Public Schools Week, or you may have noticed it on Monday, but now it's Thursday and who can really remember these things for the entire week? And, of course, public schools do not have giant slick PR departments to create polished promotional materials for such a week. You might think that the United States Department of Education might make some noise-- any noise-- in support of public education, but over the past couple of decades, the department has moved from uninterested in public education over to openly hostile toward it. 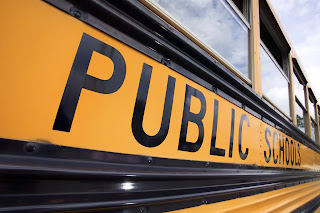 Public education has become a political orphan in this country. So it's important to take the time to remember why US public education is actually a great thing. Here are some reasons.

In many countries, public education is simply a system for telling children what they get to be when they grow up. Does Pat want to be a doctor, a lawyer or a civil engineer? Too bad-- the school system has determined that Pat should be an elevator repair person, and so that's what Pat gets to do.

But in our system, Pat gets to chart a course and the public school system is obliged to help Pat steer in that direction. Our system is not created to whip up a batch of employees for businesses, and it's not set up to tell Pat what the future is supposed to hold. It is set up to allow, aid and support Pat in making Pat's own choices.

The local taxpayers fund schools and elect the people who will run them. The taxpayers own the buildings and pay the salaries of the people who work in them. That means that public schools, unlike any other private business, cannot be gutted and squeezed for profit at the expense of a long, sustainable life (like, say, Toys R Us). That also means that the taxpayers get to ask any questions they like and know anything they want to know about how their money is being spent.

While some charters and private schools may just close down on a moment's notice, public schools are an enduring part of their community, remaining even if it's not profitable for them to stay open. In many communities, public schools are one of the most stable institutions.

And people believe in them. Yes, people grouse and complain, and yes people want their school taxes to be roughly $1.50. But when it's time to do something to help children. to improve their lives, to make them better able to cope with one problem or another, who do we always turn to? Public schools. Even when public schools fail an entire community, we don't hear demands like "Well, just release our children from any requirement to go to school at all." No-- people demand that they get the public schools they are supposed to have.

4) Public schools are responsible for all students, no matter what.

A public school system cannot pick and choose its students. It has a responsibility, both moral and legal, to provide an education to every student, even the ones who are difficult or expensive to teach.  It's easier to educate just some students, to pick and choose the ones you'd like to work with, the ones that barely need you at all. But to educate every single child is a far bolder and broader mission-- and it's the one we've given to public schools.

So much of current society is sorted and gated, with people making sure they associate only with the people they want to associate. There is certainly plenty of sorting of neighborhoods and communities that is manifested in community schools-- but public schools still feature the kind of mixing and interaction that we no longer see anywhere else in our country.

6) Public schools are a glorious mess.

Because public schools represent and respond to the interests of so many different people, those schools are messy. Many varied programs, teachers, activities, and classes all exist under one roof. It can seem unfocused and scatter-shot, but that's the beauty of it; the alternative is a regimented, orderly approach that squelches variety and outliers, and that approach benefits nobody.

Strapped for resources, public school systems must make every dollar count. There are no $500 toilet seats in public school restrooms, no $250 pencils in classrooms, and few districts that run twelve different buildings where one will do.

8) Public schools are staffed by trained professionals who devote their lives to the work.

It sucks that teachers aren't paid like rock stars, but we can say this-- nobody is in teaching just for the money, glory and fame. Nobody is hating the classroom but thinking, "Well, I still need to make enough money for a second Lexus." Public school teachers are neither martyrs nor saints, but they are in the classroom because they want to be there.

That's no small thing. s noted above, many educational systems simply aspire to create functional employees-- and that's it. A little vocational training, and out the door you go. But for democracy (or a republic style version thereof) to survive and flourish, you need a nation of educated people.

10) The promise of public education

By now, you have already talked back to this piece, telling your screen about all the exceptions you can think of, all the ways that public schools failed at the eight traits I listed above. And you're right-- public schools have failed in many ways over the decades, from the failure of institutional racism to the failure to fully embrace every single child. In our large and varied history, we have fallen short many times.

But here's the thin. You can only fall short of a goal if you have a goal. US public schools aspire to do great things, which means every day of every year, we are trying to rise and advance, to improve and grow. In this, we are truly American-- this country started by setting high standards and goals for itself, and it has spent centuries trying to live up to them. But if our goals were simply "I want to make myself rich" or "I want to have power over Those People" then we would have no hope of improving. If public schools set goals like "Just try to turn a profit this quarter" or "Get high scores on that one test" then we would have no hope, no prospect for greatness ever.

Our dream is to provide every single child with the support and knowledge and skills and education that will allow each to pursue the life they dream of, to become more fully themselves, to understand what it means to be human in the world. We do not always live up to that dream, but US public schools have lifted up millions upon millions of students, elevated communities, raised up a country.

So take a moment this week to honor and acknowledge National Pubic Schools Week. And if you have two moments, use one to send a message to your elected representatives, asking them to acknowledge this week as well.
Posted by Peter Greene at Thursday, March 15, 2018