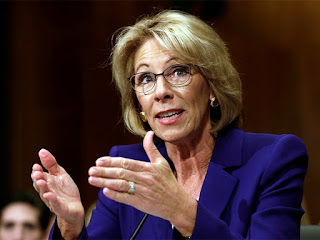 On the one hand, I'm glad that the mainstream has finally noticed some of these issues (seriously-- I'm glad folks were struck by the whole "taking money away from struggling schools is kind of dumb" thing, but some of us have been saying it for twenty years). But on the other hand I feel like I'm watching people who are being told by an assailant, "I am going to punch your children in the face" and people are reacting like this is a hilarious joke, but not, really, that assailant is really getting ready to punch your children in the face, and he just told you he's going to do it, and maybe you should do something other than make jokes about it.
Posted by Peter Greene at Tuesday, March 13, 2018
Email ThisBlogThis!Share to TwitterShare to FacebookShare to Pinterest