This weekend finally winds down my spring performance season. A couple of weeks ago we presented a two-school joint production of Shrek; tonight is opening night for my school's annual variety show. We call it the "Broadcast," named (as far as anyone knows) after The Big Broadcast, a 1932 variety film that kicked off a series of Big Broadcast movies through the decade. 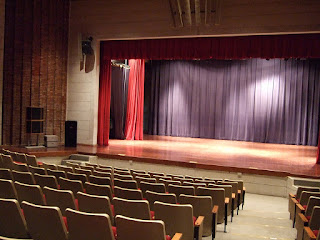 I've been directing the show for a bunch of years now. It's a pleasure to work with students in an arena that is so directly organized around performance. We have singers, dancing groups, and any number of odd surprises. One year we included a student who had bought a sitar on line and taught himself to play it. This year we've got some bucket drummers and a trio of T Rex dancers. MCs each year develop and write their own sketches to tie the evening together. My main function is to be a glorified traffic cop and get all of this to flow smoothly (I'm also the stage crew adviser).

My other major function is to make sure that each act is the best it can be. While this involves some broad standards (have energy, know your material, don't sing in keys unrelated to that in which your accompanist is playing, etc), preparing a student variety show is the very definition of a non-standardized activity. Each singer approaches her material with her own personality and style. High levels of precision are more attainable for some dancing groups than for others (and for girls dancing in inflatable T Rex costumes, precision really isn't the point). Each performer has personal goals, brings personal skills and choices to the attainment of those goals, and responds to different styles of coaching and directing. How I work with them is also a function of the relationship that we have (or don't), as well as my own judgment about how far and hard I can push them without making things worse instead of better (demoralizing a performer pretty much never elicits their best work). Sometimes as we work together, we come up with really cool pieces of inspiration; sometimes the performers find their own way to a sweet spot outside the box (I wish I could show you Zoe and Matt doing Coldplay's "Yellow" with guitar and upright bass).

A full book show is, of course, even more challenging. I'm fortunate in that my years on the co-op show have been spent with a woman who is a hugely gifted director, who gets just how to create a picture, what movement to incorporate, how to pull all the pieces together. It's a combination of so many little details in the service of a bigger vision, all put together with the work of students who are, generally, not exactly fully mature performers. But there are moments when things come together, when we find space for bits of inspiration and improvisation, on top of the adjustments that one must make when translating vision into reality.

I've been doing school and community theater for thirty-some years, learning a little more every single time. But there's one thing I'm absolutely certain of.

A show could not be put together by a piece of software.

You could not give each performer some sort of standardized test that would generate data that in turn would determine how people should be cast and how they should go about developing their performance. You could not, in place of rehearsal, have everyone come in and take an on-line performer quiz that would generate a personalized set of software-generated performance improvement instructions. You could not even have the computer "watch" the student perform and then generate a personalized performance report.

The whole idea of a computer "directing" the school show is so transparently foolish it's hard to tell which parts to mock first, but in particular, think about how a student's performance would change if they were performing not for a live human, but for a piece of software. As a performer, it's very hard to get excited about performing for an audience that won't get excited back at you. Software doesn't know the student, doesn't have the background of knowledge to place the student's goals in the context of music in general, doesn't have the understanding to gauge what an audience may or may not respond well to, knows neither the difference between nor the proper timing of holding a hand or kicking a butt. Software doesn't know how to build the trust necessary to convince a performer "It may seem awkward at first, but trust me, this will help the performance."

Nor is it possible to compare all performers on some standardized scale. Was Tyler's dry, wry turn as Gomez Addams "better" than Kate's moving and layered portrayal of Belle? Did Forrest "beat both of them by stopping the show with a single grunt as Lurch? Did the tap dance routine from ten years ago rate "higher" than last year's modern jazz-flavored dance group? And how do I compare either of them to the rock band that covered 99 Luftballoons, or Maddy playing Budapest on ukulele? Exactly how would any piece of software crank out a 4-point-scale rating for any of these?

Bottom line: a computer is too dumb, too ignorant, too not-human to direct your school show.

Now. Does anybody really think that teaching students in a classroom is all that different from directing them on a stage?

I don't. And for all the reasons I believe that software would make a terrible show director, I think software makes a lousy teacher, no matter how "personalized" or algorithm-driven it is, no matter what super-duper data wingdoodles it has.

Spare a thought for us tonight. My students have some traditions to uphold, and they are more than ready to meet the challenge. There are many, many parts to teaching; this is one of the best.
Posted by Peter Greene at Friday, March 23, 2018