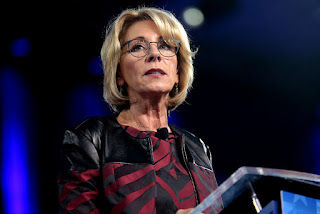 At the end of a year, DeVos's priorities-- or at least preferences-- remain clear. What is not clear is her path to actually accomplishing any of them. She has no allies in Congress. Her boss is unlikely to care much about what a sixty-year-old woman has to say about anything. And she can try talking to the rest of us, but is there anyone, really, who takes her seriously on the subject of national education policy? She certainly represents may of the existential threats to public education, but as Secretary of Education, I'm beginning to believe that she 's just a big nothingburger.
Posted by Peter Greene at Tuesday, January 02, 2018
Email ThisBlogThis!Share to TwitterShare to FacebookShare to Pinterest