Yup. I'm going to direct your attention to a piece from reformster Chester "Checker" Finn (Fordham Institute Emeritus) because I agree with huge chunks of it. 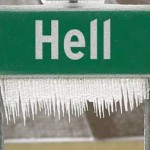 This new piece-- "Betsy DeVos is wrong about accountability for schools of choice"-- does not come out of nowhere. Earlier this summer Finn came out swinging hard for accountability more deliberate and defined than a simple, childlike faith in a parent-wielded invisible hand. But now he's doubling down and explaining why-- and damned if we don't agree on much of this.

He starts by noting that DeVos, in her recent interview with the AP, once again indicated that parent choice is pretty much all we need to hold schools accountable in a choice/voucher system. Also, authorizers matter, and here Finn notices a bit of an issue:

When it comes to charter schools, the Secretary acknowledged that authorizers play a role alongside parents, though she picked the dubious case of Michigan, her home state, to illustrate the point. The Wolverine State certainly has some top-notch authorizers, and they have indeed closed down some failing charter schools, yet the overall track record of Michigan charters is too spotty—at least in the eyes of those who value academic achievement and fiscal probity—to warrant citing it as a stellar example of quality control via authorizing.

Indeed. Consider Bay Mills Community College, a tiny upper peninsula Michigan college that gets the lion's share of its funding by authorizing charter schools hundreds of miles away in Detroit. "Spotty" is a kind term for the charter record in DeVos's home state.

Then he notes this about parents as the first line of defense:

Parents as first line of defense, sure, although she appears to trust the schools themselves to equip the parents with the information they need to make competent decisions. There’s no sign of any sort of impartial data source.

Indeed. What we've seen is that charters are far more interested in marketing than informing, that they are no more committed to getting fair, full, impartial information to their customers than any other company with a product to sell.

And the second line of defense? DeVos doesn't mention any such line at all. Again, this is not a surprise-- everyone who knew told us that DeVos had been strongly anti-accountability as a choice activist.

That's not okay with Finn, who rattles off many of the accountability measures that the Fordham has touted over the years. They're all Big Standardized Test based and therefor junk as far as accountability goes, but I'm going to step past that for today. What's most important, and what I agree hardest with, and what I have often said is wrong with parent-centered choice-- well, Finn lays right into that. He notes that several studies have suggested that voucher systems get lousy or at least not-good academic results.Then:

Sobering, yes, and if we were single-mindedly dedicated—as perhaps Secretary DeVos is—to expanding and extending access to such programs, we might back off from results-linked accountability. In the long run, however, it’s better for choice, for kids, for taxpayers, and for the country’s economic vitality and social mobility that we continue to insist: No school, public or private, is a good school unless its students are learning what they should. And where public policy and public funding are concerned, what kids should learn is a matter of public interest and so are the results that their schools are—or aren’t—producing. It would be wonderful if the parent marketplace were a sure-fire mechanism for gauging and producing those results. Sadly, it simply isn’t. Which is to say, again sadly, Secretary DeVos has this one wrong.

Yeah, we're still going to disagree about what students "should" learn and how we'll know they're learning it. But we are in agreement that public education is not simply a service provided to parents, as if there are no other stakeholders. In fact, taxpayers and society as a whole have a huge stake in good schools. My take-- DeVos and other free market purists want to get all those other stakeholders out of the room so that private schools can pitch as they like to individual parents without some nosy gummint poking its head in to say, "Actually, this school kind of sucks" and queering the whole sales pitch.

But hey-- these are contentious times lately, so I'm just going to enjoy this harmonious moment with someone with whom I generally disagree a great deal.

Oh-- and before someone pipes up with, "But you public ed defenders hate accountability," let me just say for the sixty gazillionth time, no, we don't. That's a story that reformsters tell themselves to explain why we've been so resistant to so many terrible accountability ideas. We are actually big fans of accountability; what we are not fans of are crappy measures based on imaginary data and fried baloney equations and counter-factual assumptions and just generally crap no more valid than bouncing a seven-sided die off the warts on the back of a one-legged horny toad under a full moon. Come up with something real, and we'll be fans.


Posted by Peter Greene at Wednesday, August 16, 2017
Email ThisBlogThis!Share to TwitterShare to FacebookShare to Pinterest