The reformsters at The74 are providing a platform for the reformsters at Learning Heroes to pitch the same old dreck (I provide the link not because I think you should follow it, but to keep myself honest and allow anyone to check my work who wants to).

Learning Heroes is one more Gates-linked group (via funding and founder Bibb Hubbard, who's a  Gatesian herself). They are particularly devoted to the Cult of the Test, and in fact we did pretty much this exact same song and dance about a year ago. 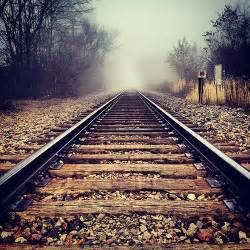 This time around writer Kate Springer frames the issue as On Track-- 90% of parents say their children are on track in math and reading, but "The real number? Just 1 in 3"

On track? On track??

On track to what? As determined by whom? Based on what evidence?

And really, "track" is problematic as a metaphor, because a track runs from one place to another. The people who assemble these slabs of data-like numbers never look at where the students are coming from, yet that's a piece of information with which parents are intimately familiar. And this "track" data is not a track at all, but a point, a single slice of data from one day of one year. So in a real sense, the conversation between reformy tracking groups and parents is something like this:

The underlying reformster assumptions here are all false. They assume that there is one single track that all students must travel on, and therefor one track on which their position can be measured. One track for everyone, a track that starts at the same place and ends at the same place. They also assume that they know where that track and they know what the endpoint should be. They talk as if we can know with great certainty that if you are in the Cleveland train station today then you ar right on track to arrive in Boston, even as they assume that they know you should WANT to be in Boston tomorrow. And who gets to do that? Who can best decide when a child is "doing fine" and who has the right to decide what "fine" means? Who are these people so wise that they know the one destination that all students should pursue, and the one track that leads there?

In fact, every single student-- every single live human being-- is on an individual track, a track that starts from where they began their journey, and which ends at the destination of their choosing (including, as well, the many times that they will change their minds about the destination).

Finally, above all the rest of this, this kind of language is an attempt to obscure and give undeserved weight to what we're really talking about-- the student score on a single narrow standardized test.

"Student achievement," "on track," even, as in Springer's piece "how they are doing in school" are all rhetorical smokescreens for "score on a standardized test."

Why can't we talk about what we're really talking about? Because then this conversation would be transparently foolish. "90% of parents thought their children will score above the arbitrary cut score on a single narrow standardized test, but they turned out to be wrong" is not much of a grabber. Because so what? Test scores are a reliable proxy for what, exactly? There's no reason to believe that the answer is anything except "nothing." And if you don't believe me, consider the writing by Jay Greene, an unrelated much more reformy Greene, who has written repeatedly about the disconnect between test scores and life outcomes.

But this misuse of tests as proxy is everywhere in reformdom. Here's DC claiming that their teacher evaluation system weeds out bad apples, when all they've done is prove that if you focus on keeping teachers who are good at test prep, your students will get better test scores.