Someone brought this classroom poster to my attention today: 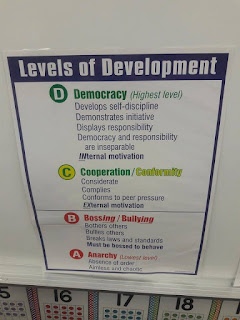 There are so many problems here. Equating considerate, compliant and conforms is just bizarre, like saying that bananas and baseballs make for equally good meals because both start with "b." And bossing is somehow a lower level, as if bossy people can be expected to grow into compliant people (who then become democratic people)? And the idea of some five year old child coming home from school today to despondently tell her parents, "Today I was an anarchist." Because when you run down the hall, you're not just breaking a rule or letting your five-year-old feelings carry you away-- you are challenging the very order of the universe itself.

The source of this system is, as is often the case, a guy with a dream and a consulting firm. Marvin "Marv" Marshall has written some books and booked a bunch of speaking gigs, so you know he's an expert in the field of stress reduction. In particular he focuses on reducing stress by exercising authority without coercion. Note, that's still essentially an authoritarian approach. Just a smiley one.  He's been a college lecturer, operated a charity to spread his ideas, and taught school (though I can't find anything about where or how long). Along with various other degrees, he scored a Doctorate in Education from University of Southern California in 1968. He's been an author and presenter since 1992.

There is a Marvin Marshall Preschool and Children's Center in Carmichael, CA, presumably without any nests of anarchists in it (GreatSchools reports enrollment of 2 students, both white). There are youtube videos, including a long one that explains, among other things, that the method was developed "to meet the needs of today's diverse students" which certainly matches the impression is a system about "criminalizing" non-compliant behavior. In another he credits his system as a "take-off" on Kohlberg's Theory of Moral Development and it is, in the sense that tofu is a take-off on meat.  And you can watch Marshall himself in action; I will warn you that he has a bit of a smarm issue (which is fine-- after all, I have a bit of a jerk issue).

In short, I'm not so sure how much we can trust the expertise behind this system. And Nancy Bailey does an excellent job of putting this in a larger context of school discipline.And while this system drew attention because it popped up in Pasco County, Florida, you should know that it's spread far and wide-- here's a slide show presentation about it from a school in California.

But the bottom line here is, do we want to teach five year olds that being an anarchist is a bad thing and being compliant is a good thing? What if we renamed Marshall's stages-- what if students were labeled "freedom fighters" or "soldiers of the patriarchy" or "weasely collaborator." Heck, we could assign students to one of the four houses of Hogwarts every day. Or we could come up with a schema based on chaos and order muppets. I rather like the image or a small child coming home to announce, "Hey, I'm still a Swedish Chef today!!" And if you like your Muppet universe a little more complex, then there's this chart: 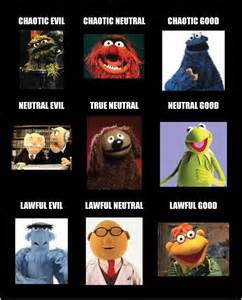 Here's the thing to remember about discipline systems at school-- every one of them codifies somebody's value system, sets in rules and regulations judgments like "being compliant is good" or "a good student is one who questions authority." When a system codifies love of compliance (and can't distinguish between compliance and cooperation) and negative labeling of any sort of age-appropriate behavior (five year olds running! zounds!!), my eyebrows go up. Frankly, I'd much rather see a system that codifies fuzzy Muppets.

Posted by Peter Greene at Friday, August 18, 2017
Email ThisBlogThis!Share to TwitterShare to FacebookShare to Pinterest