To Save the Village...

There's a new documentary out dealing with the history of the Cabrini Green project in Chicago. 70 Acres in Chicago deals with the many complicated issues of race and urban poverty. But as the Slate article about the documentary notes, it underlines another huge issue with the "improvement" of some urban neighborhoods. 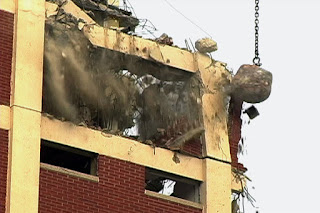 
The idea behind these housing project upgrades is always pretty simple. Here comes the city to say to the poor folks living in the projects, "Aren't you tired of living like this? We are going to knock these projects down and replace them with something better. Yes, you are going to have to find another place to live, but when we've finished, you'll be eligible to come back here and live in the newer better place."

That seems like a great idea, a straightforward way to improve quality of live for those living in public-assistance housing.

But as writer Dianna Douglas notes, that's not how it works. Mostly, the people who have been displaced by the new project do not come back. The most successful such project in the country was in Atlanta, and that project brought back a whopping 25% of the original residents. The national average "hovers below 19 percent."

Some of this is simply circumstance. Moving is expensive. Doing it twice is way expensive. But some of this is also design. The Cabrini-Green redevelopment will follow the new model of mixing low-cost housing with higher SES models for a mixed neighborhood. But there's a problem.

The decrepit, infamous Cabrini-Green had 3,600 public housing units. When the rebuilding is complete in 2019, there will be around 2,830 units. Only 30 percent are for families in public housing. Got that? Fewer than 900 units.

And as Douglas notes, the rules for getting into those limited units can be pretty strict.

The message for the urban poor when it comes to gentrification is simple-- we're going to make this neighborhood better by moving you out of it. Meanwhile the actual humans who have been moved out may find themselves in a rougher situation, an equally bad neighborhood, but now without the neighborhood ties, the little bit of social capital that they had previously worked up in the original (now "improved") neighborhood.

Does this apply to charter schools in some cities? Here's a response from a reader in a recent Valerie Strauss/Carol Burris piece at Washington Post

I live in a neighborhood in Washington,DC that is undergoing regentrification. It is still prodominately African American but Whites have moved in within the last five years. The Washington Latin Public Charter School which opened about four years ago has a predominately White student body in a predominately African American neighborhood. I have two children that are in Middle School and High School and they are not allowed to attend the school that is in walking distance ( school sits at the end of my block). They have been wait listed for years. I finally just enrolled them in another charter school that has a predominately African American and Hispanic student body. When we drive past the school every morning we see White kids being bused from outside the neighborhood. My kids now know what segregation looks like in 2016. These white students are coming from Eastern market, Tenley Town, and Logan Circle. All of those white kids live outside the neighborhood. I brought it to the attention of the Charter School board here in Washington and nothing changed. As stated in the article the members of Washington Latin School Board are predominately all Attorneys from Georgetown, Yale and Harvard Law School. This means that trying to change the policies on how students are selected will be extremely difficult. It's as if the Charter School Board is afraid of the elected members at this school.

But what good does it do to save a neighborhood or a school if we throw away the people? What good does it do to "fix" a neighborhood school when the neighbors are gone and the students come from some other neighborhood? If the actual problem was that the neighborhood or the school were not meeting the needs of the people, how have we solved that problem? The same people who were not served before are still not being served-- they're just not being served somewhere else. Of all the wrong ways to do charter schools, this is the wrongest.

Posted by Peter Greene at Friday, August 12, 2016
Email ThisBlogThis!Share to TwitterShare to FacebookShare to Pinterest