Voting with Their Feet

One feature of "unleashing the power of the free market" in education is supposed to be a sort of regulation by the market's infamous invisible hand. Customers will "vote with their feet," driving the bad actors out of business. 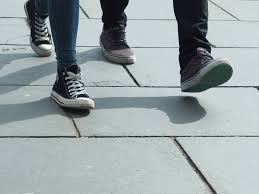 In this country, there will always be an argument to be had about how well this really works. It's one of the dances of freedom and commerce that we have regularly. Is it okay to let Americans vote with their feet for grossly fat and unhealthy processed fast food? And are consumers moving the invisible hand based on their own honest desires, or are these hand-moving consumers themselves being moved by the not-so-invisible hand of marketing? And just how involved should the big fat heavy hand of government be in any of this? These are difficult and complicated questions, and I bring them up only to note that the idea that we just open a free market and the invisible hand sorts out the choices and-- voila!!-- quality!!-- well, that vision is a gross oversimplification and not very much like what actually happens at all.

We can already see the many ways in which the bipedal plebiscite is not working for education.

Exhibit A is the cyber charter industry. Let me first insert the disclaimer that for a small, select group of students, cyber school is an excellent solution. Having said that, the cyber charter industry at large is a huge failure, so huge that even the rest of the charter industry is calling for them to shape up. Cyber charters are a disaster, a waste of student time and taxpayer money. And yet, even though virtually every even-sort-of-responsible-voice in the education field has condemned cybers, the army of foot-voters have not yet put them out of business.

Why not? I can only offer theories based on anecdotal evidence. One is that people are voting with their feet, with cyber students either dropping out or returning to public school, often behind their peers. "I'm always excited to have a former cyber student in my class because I know they will be really on top of the material," said no teacher ever. However, so far, cyber marketing and aggressive recruiting keep new bodies signing up. Schools are made to be a churn and burn market-- you are always losing "customers," so your focus has to be on recruiting.

I think it's also safe to say that a certain amount of the education market is filled with customers who are not so much looking for "a good quality education" as they are looking for "something that allows me to look like I'm meeting the legal requirements for school attendance without having to actually do too much work." For that part of the market, cyber charters are exactly what they are looking for.

As charter fans implicitly agreed in their criticism of cybers, foot-voting alone will not create quality. Some sort of government oversight is required as well.

Exhibit B is in Livermore, California.

Livermore is providing a real, live example of the kind of chaos that ensues with students and their families employ the foot-based voting strategy.

In a move that one news outlet characterizes as pulling out and another characterizes as fleeing, roughly 400 students are exiting Livermore Valley Charter Prep School and Livermore Valley Charter School. The concerns raised include financial mismanagement, which has resulted in issues like unpaid rent and late-if-ever paid staff. But there have been other concerns-- like finding out that the newly-hired principal sympathized with mass shooters (he is now the ex-newly-hired principal). And there may be a criminal investigation into the handling of exchange students who were transferred to a different school against their will.

So this charter operating company has some issues which it may or may not get a handle on. In the meantime, 400 students and their families are flooding back into the system, making demands on public school capacity that it is not prepared to meet. Livermore Valley Joint Unified School District (a district in desperate need of a new name) reportedly received twice as many new students as it was prepared for.

We talk often about how charters duplicate many of the services that are provided by the public schools, creating a double or triple or more system that cannot help but be more expensive.

But what we discuss less often is the need for excess (duplicate) capacity. The only way that the bipedal charter deselection option can be NOT disruptive is for every public system to maintain a seat for every student who might conceivably attend there. In other words, if Chris decides to attend a charter, Chris's public school needs to keep a seat available for Chris, just in case Chris's feet decide to vote against the charter. Otherwise, when and if Chris returns, there's no place for Chris to go.

And sure, if it's just Chris, it's not a big deal. But if it's Chris and 100 close friends, there's a big problem. LVJUSD needs to hire staff, find rooms, get supplies and books.

The public school can't keep Chris's seat warm, because the money to maintain Chris's seat left the district when Chris did. Multiply by a few hundred, and in some districts a fiasco like the Livermore one would require finding an entire other building.

Yes, if you maintain a charter-public hybrid system, you can build in all sorts of robust flexibility, but the thing about robust flexibility is that it costs money. And that brings us back to the Big Lie of charter systems-- that they don't cost a bunch of extra money. To maintain a system in which you operate several separate schools, including a public school that always has enough room for everyone who could conceivably want to attend (because you never know when people may vote with their feet, or a charter might just close) is far more expensive than a single public school system.