Rocketship Academy's blog recently ran a piece by one of their teachers that really captures some critical problems with their entire approach to education. Step One, it suggests, is to get children to not behave like children.

Kindergartners Conquering Personalized “Quests” Learn To Love Reading was contributed by Lauren Berry, who has a solid modern charter background-- after graduating from USC with BA in English Language and Literature in 2013, she put in two years with Teach For America at Rocketship Academy, then moved up to Lead Teacher last year before becoming a Model Teacher for Rocketship just last month. 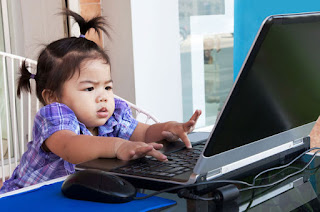 Berry is here primarily to plug eSpark, a computerized individualized personalized instruction program, aka one of the vendors set up to go after the Competency Based Education market. We could talk about what's wrong with that approach, and in particular could address the idea of delivering education via tablet to five year old children. But first let's look at some other problematic assumptions here, visible from her very first paragraph.

Anyone who’s worked to teach kindergarteners how to read knows that it can be a slippery challenge. Their squirmy bodies are full of energy, which can make it difficult for them to sit still through reading instruction, let alone through an entire text that they’re still struggling to understand.

Berry's description of the program is familiar to anyone who has checked out CBE. The students go one "quests," each one aligned to a particular reading standard, and then completes a performance task at the end, including one in which the student will "prepare a script that introduces themselves, explain the answer on video for me to grade and provide feedback."

Berry thinks this is swell because it cuts her prep time in half, which is undoubtedly a big help when you didn't study education in college and have only been in a classroom for three years. That's not a slam on beginning teachers-- those first few years are rough, and while people who have actually trained to become elementary teachers emerge from college with stacks and stacks of usable materials, TFAers who enter the classroom with next to no resources must have a hell of a time. But of course, part of what she's excited about here is how many steps eSpark has taken toward making her job obsolete-- no human being there in the classroom to design or personalize the instruction, but instead, all of that handled by the software, which is another way of saying that Berry has abdicated all of those decisions and handed them off to whoever is behind the software.

Berry's praise for eSpark is largely centered on how much easier it makes classroom management. Students are riveted by the quests, and stay focused on other tasks because they want to get back to eSpark time. What she has to say about student achievement is not encouraging:

Since then, every student masters at least one standard each week, which is raising our reading achievement scores and fostering strong, curious readers who are eager to take on greater challenges.

The appropriate number of "achievement scores" for a kindergarten class is zero. The appropriate amount of time for five year olds to spend taking tests measuring their academic achievements is zero hours and zero minutes. If you find the five year olds in your room to be antsy or slippery or having difficulty focusing on academic subjects, that is a clear signal that something is wrong with your classroom-- not your students.

Berry's students were only spending twenty minutes a day on eSpark, but it still raises the issue of screen time for small children. Nor does she address the issue of readiness and how such a program would individualize reading instruction for students who are still six months away from being ready to begin learning to read. And since this was a first-year pilot, she won't know for a while how many grades of this students will tolerate before they find being programmed by the screen just boring and easily gamed.

In short, there's no question here about whether or not such a program is effective or appropriate. Only one more example of the philosophy that says, "Hey, I have a great (and marketable) idea about how to teach kids. If we can't just get kids to match my model, it will be awesome." But that's what we can expect when schools are created to be profit centers-- we forget the question "How can we best meet the needs of these students" and focus instead on "How can we best get these students to meet the needs of our company."