Massachusetts is heating up. Perhaps no state has better exemplified the fierce debate between public school advocates and fans of modern education reform. Ed reformers captured the governor's seat, the mayoral position of Boston, commissioner of education, and the secretary of education offices, and yet have consistently run into trouble since the day they convinced the commonwealth to abandon its previous education standards in favor of the Common Core Standards-- which were rated inferior to the Massachusetts standards even by the guys paid to promote the Core. 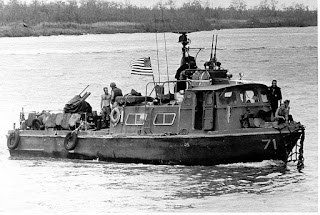 These days the debate has shifted to the issue of charter schools. Specifically, the charter cap. Currently Massachusetts has a limit on how many charter schools can operate in the Pilgrim state. The people who make a living in the charter biz would like to see that cap lifted, and the whole business will be put to a public referendum in November.

So well-heeled charter fans have collected a few million dollars, and they have hired DC-based SRCP Media, most famous for the Swift Boat campaign that sank John Kerry's candidacy. The Swift Boat campaign was also a demonstration of the fine old political rule, "When the truth is not on your side, construct a new truth."

So is SRCP manufacturing truth in Massachusetts?

It appears that the multi-million dollar ad buy will lean on that old favorite-- charter schools are public schools. And when I say "favorite," what I actually mean is "lie." But let's look at the whole thirty seconds.

We open with a Mrs. Ingall, who is listed as a "public school teacher." That would be Dana Ingall, a teacher at the Match Charter School, whose bio says that she attended University of Michigan, joined Teach for America in 2011, was sent to Delaware and Harlem, and earned an Elementary Ed Degree from Wilmington University. She hasn't been in Boston long.

But she still knows how to say "Massachusetts public charter schools are among the best in the country," which is sort of true, if all you care about are test scores, and you're cool with charters that keep their test scores high by suspending huge numbers of students, carefully avoiding any challenging students (like the non-English speaking ones),  and chasing out those who don't get great scores.

Then Voice Over Man comes on to tell us that Question 2 will expand charter school access and "result in more funding for public school" which probably refers to the state funding formula. When Chris goes to a charter, the per-pupil money follows Chris, but an amount is paid to Chris's public school, to soften the financial blow. Massachusetts' formula is probably the best in the nation-- but that "increase in education spending" would be on the order of a billion dollar. Which means one of a couple of things would happen-- either the taxpayers would be asked to cover that billion-dollar payout by raising taxes, or the state would find the billion in charter cost coverage by cutting some other part of education spending. So, for instance, Pat doesn't get to go to pre-school because the state has to pay to send Chris to a charter. Any way you cut it, the cost of sending Chris to a private school will be felt by taxpayers and public education.

Oh, and Chapter 46, the law under which all that reimbursing happens-- it has never not been fully funded in the past several years*, so local districts have to make up the difference. When Chris goes to charter school, the local taxpayers have to kick in to pay for it. [Update: Courtesy of Save Our Public Schools MA, here's a more detailed look at just how underfunded charter reimbursement of public schools is-- and will be] 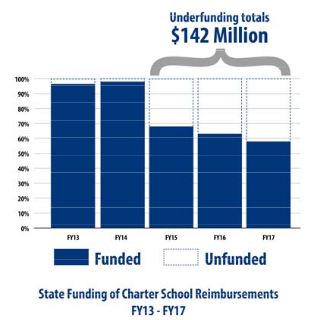 The ad is bankrolled by Great Schools Massachusetts, a group that exists just to get the charter cap lifted. They are an umbrella that covers long-time reformster groups like Families for Excellent Schools, an astroturf group that fronts for Wall Street investors.

Peruse the Great Schools Massachusetts site and see other examples of Totally Not Grass Roots in action. Here's the professionally filmed and staged launch of the site, featuring an appearance by Governor Baker, who talks about students stuck in bad schools in bad neighborhoods as if he had no idea, no power, no say in getting state resources to those schools in order to improve them. But no-- the only hope is to open a charter schools so that a favored few of those students can be rescued in a lifeboat made with planks from the hull of the ship that's carrying everyone else.

Or listen to Dawn tell the story of how her son was rejected by a dozen charter schools until KIPP finally accepted him. The solution to this, somehow, is more charters and not a better investment in public schools.

The big lie in all of this push is the suggestion, hint, or sometimes outright statement that charters are public schools.

Public schools must take-- and keep-- all students-- at any time. Charters do not. Look at the attrition rates. Look at the limited population of special needs students. Look at the suspension rates (a good way to communicate that a student is not welcome). Look at the dismal charter graduation rate for young black men.

Public schools must operate with transparency and accountability. All board meetings must be public. All financial records must be readily available to any taxpayer who asks to see them. Charters have repeatedly gone to court to assert that, like any private business, they do not have to share financial information with anyone.

Public schools must follow certain laws in dealing with employees and students. Charters do not and, again, have gone to court repeatedly to assert that they are not subject to the same rules as public schools. And while they love being able to work without a union or a contract, they are also happy to avoid following any protections for student rights. In fact, these two "freedoms" can result in teachers being fired for standing up for student rights.

Public schools must stay open and operating as long as the public demands it. Charters can close at any time they wish, and because they are businesses, they will close at times that make business sense, not times that make educational sense, or that most weigh the needs of the students.

Courts have repeatedly found that charter schools are not "public actors"

In fact, in the last year we've seen a rise in charter fans pushing a "Can't we all get along?" narrative. The director of Philadelphia Charters for Excellence last fall said "It is time to move past the adversarial position of 'traditional vs. charter' schools and work to create an environment where both sectors can flourish." In March, Massachusett's SouthCoast Today joined some charter chiefs in asking, "Can charter and district schools be partners in education?"

It's a change from the older trope that free market competition would drive everyone to excellence. But the two approaches have one thing in common-- they recognize that charter schools are not public schools.

Nor are they treated the same by Massachusetts, which makes sure that the charter gets every cent coming to it, but looks at the public school system and shrugs, "Talk to your local taxpayers."

Nor will things be sorted out by the free market. Charter operators already know this-- several brick and mortar charter folks have spoken up to say that the government needs to clamp down on all the crappy cyber-charters. But by their own theory, such intervention shouldn't be needed because parents will vote for quality with their feet-- but the free market doesn't work for charter schools at all, even when it is tilted to treat them one way and public schools another.

So when a long-time charter booster like Peter Cunningham, former spokesmouth for Arne Duncan's Department of Education and current word-ronin for well-heeled reform investors, writes something like "First of all, charter schools are public schools. Arguing that charters take money from traditional schools is like arguing that a younger sibling takes parental attention away from an older sibling." He knows he's shoveling baloney. It was far more honest when he tweeted


Not add to or support or enhance. Supplant. Replace.

Replace a school system with democratically-elected leadership, a system that must teach all students, a system in which taxpayers have a say, a system that comes with a long-term commitment-- replace that with a system that entitles some students to attend any private school that they can convince to accept them. And keep them. And stay open.

Are public schools perfect as is? Not even close. But the solution is not to rescue a favored few at the cost of making things worse for the many left behind. If charter advocates wanted to approach this honestly, here's what their proposal would say--

Vote to have your taxes raised to finance a new entitlement for every child to have the option of attending private school at taxpayer expense. Vote to shut down public schools and replace them with schools that aren't any better, won't serve some of your children, and aren't accountable to you, ever.

Let the swift boaters make an ad to sell that.

*Corrected from original version once I found the actual information.
Posted by Peter Greene at Wednesday, August 10, 2016
Email ThisBlogThis!Share to TwitterShare to FacebookShare to Pinterest